Members of Association of Women in Black were assaulted in Serbia on their way to commemorate the 19th anniversary of the Srebrenica genocide in Bosnia. 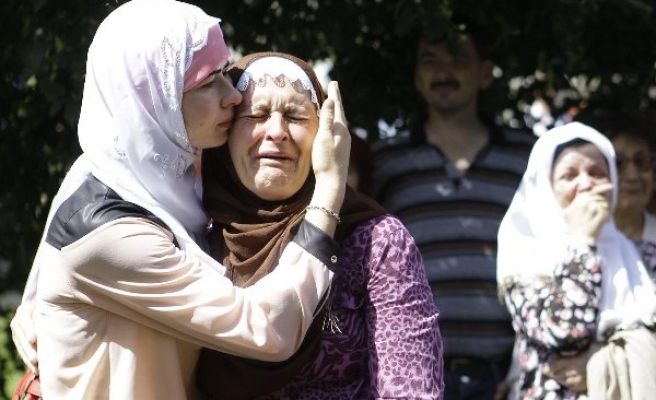 175 victims of the Srebrenica massacre, one of the worst massacres in Europe since the end of World War II, will be buried 19 years later after their bodies were found in mass graves.

Hundreds of people lined Sarajevo's main street to pay their respects as coffins carrying the remains of the victims passed by, amid silent prays in front of Bosnia's presidency on Wednesday.

The vehicles then left for Potocari village, which is near Srebrenica.

The victims, who were identified through DNA tests, will be buried on Friday on the 19th anniversary of the massacre.

So far 6,066 victims have been positively identified and buried from the massacre which is believed to have seen the murder of over 8,000 Muslim men and boys from the village of Srebrenica.

During the war in Bosnia, Srebrenica, the northeast of the country was declared a safe zone by United Nations, but was captured by Serbian troops commanded by Mladic on July, 11 1995. The UN troops failed to protect the people who had gathered there and abandoned the area.

A group of women on their way to attend the commemoration of the 19th anniversary of the Srebrenica genocide were attacked Wednesday in Valyevo, in western Serbia, according to witnesses.

A group of young people attacked verbally, then threw eggs and other objects at the group as they began to commemorate the Srebrenica genocide in the center of Valyevo, Stasa Zajovic, the co-founder of the Women in Black, said Wednesday.

Lilyana Radovanovic, Deyan Gasic and Milos Uroshevic were injured in the attack, according to Association of the Women in Black.

"Some people in Serbia think that people cannot commemorate the Srebrenica genocide but I have mercy for them because they demonstrate Serbia as a bad country," Zajovic said.

The group who attacked the women wore T-shirts bearing the image of Bosnian Serb Gen. Ratko Mladic. Zajovic said police did their best to protect the group but were outnumbered.

Mladic, 70, is now on trial in The Hague, Netherlands, accused of committing war crimes, crimes against humanity and genocide. The Srebrenica massacre is considered Europe's worst atrocity since World War II.