"The situation across Bosnia is very difficult, particularly because we don't have help from the air except for EUFOR," Agic said. 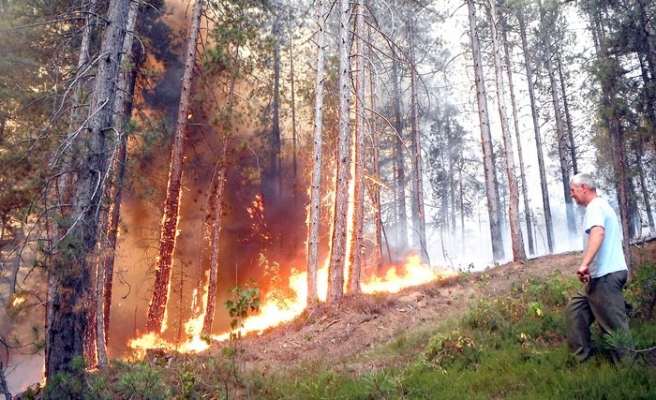 A bishop called on Serbs to repent and pray for rain as the Balkans sizzled in soaring temperatures and poorly-resourced emergency services struggled to douse hundreds of wildfires set off after an exceptionally dry summer.

The European Union's peacekeeping force in Bosnia (EUFOR) deployed helicopters to battle fires in the eastern Bosnian region of Bratunac, and smoke hung across the southern Mostar valley from flames threatening some residential areas.

Temperatures in the western Balkans have soared in the past week to over 40 degrees Celsius (104 Fahrenheit), dashing any hopes of rain to salvage the harvest.

Authorities in Serbia said they had registered 260 fires on Friday morning, the worst in the Cigota pine forests of the southwestern Zlatibor mountain and the western Tara National Park, both popular tourist spots

No casualties have been reported.

"It's burning everywhere. We've never seen this before on such a scale," said Predrag Maric, the head of the Serbian Interior Ministry's emergencies department.

Orthodox Christian Bishop Milutin, from the western Serbian city of Valjevo, called on Serbs to congregate on Sunday, repent their sins and pray for rain.

"Many have asked why the Lord has allowed such a misfortune to descend on the land. Why such a punishment?" he was quoted as saying by the Valjevo diocese. "Clearly, the cause of such misfortune is human sin and lack of care for the natural order of things."

Authorities in Bosnia appealed for international help. In Kosovo, emergency services said they had asked NATO's Kosovo peace force to provide helicopter support and were waiting for an answer.

Rough terrain and landmines left over from the Yugoslav wars of the 1990s have hampered the efforts of firefighters in Serbia, Bosnia and Kosovo, which lack aircraft capable of fighting the flames.

"There's a huge part we can't reach because of the landmines from the last war and we can hear explosions time after time," Fadil Kodra, head of Kosovo's Emergency Department, told Reuters from the mountainous southern region of Dragash.

Bosnia's assistant minister for protection and rescue, Samir Agic, said he hoped a Russian fire-fighting helicopter currently deployed in Serbia would be transferred to Bosnia on Friday.

"The situation across Bosnia is very difficult, particularly because we don't have help from the air except for EUFOR," Agic told Reuters.

In Croatia, local media reported a surge in visitors to the Adriatic coast, where Dalmatia county authorities said they were considering moving the start of the school year from Sept 3 to Sept 10 because of the heat.

The prime minister of Bosnia's autonomous Serb Republic, Aleksandar Dzombic, estimated the damage from wildfires in the Serb Republic alone at $540 million.