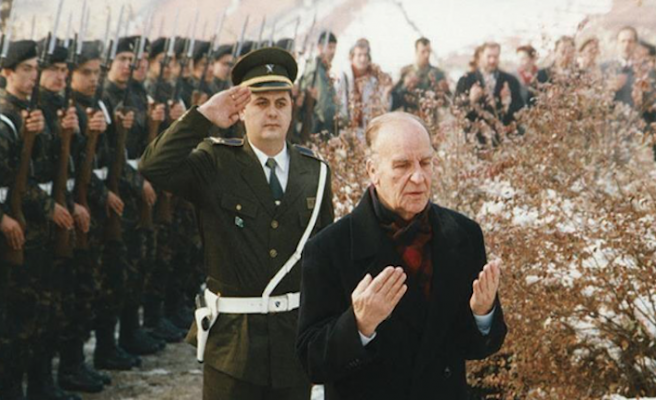 Friday marks the 15th death anniversary of Alija Izetbegovic, independent Bosnia’s first president and a pivotal figure in the troubled history of the Balkans.

Izetbegovic -- a politician, writer and lawyer who came to international prominence during the country’s bitter 1992-1995 war -- is commemorated every year on his death anniversary.

Often dubbed the "Wise King", Izetbegovic managed to gain independence for his country on March 1, 1992 - months after Slovenia and Croatia broke away from the former Yugoslavia.

Izetbegovic died in Sarajevo on Oct. 19, 2003 of natural causes, having served as president of the Republic of Bosnia-Herzegovina from 1992 to 1996 and as chairman of the Bosnian presidency until October 2000.

It was in Izetbegovic’s Islamic Declaration, published in 1970, that Bosnian independence, national consciousness and the expansion of Islamic thought found an audience.

The book dealt with the relationship between the West and Islamic world and how to build a new civilization.

His writings got him in trouble with the Yugoslav authorities. Along with 12 other Bosniak scholars, he was jailed for 14 years after being accused of "separatism and establishing an Islamic state" in 1983, but was released in 1988.

He entered politics the same year and founded the Party of Democratic Action (SDA) in 1990 -- aiming to empower Bosniaks in their own land.

Being one of the six republics of Yugoslavia, Bosnia's SDA won 86 seats in the 240-seat parliament in 1990's first multi-party elections.

In February-March 1992, a referendum on independence for Bosnia-Herzegovina was held, in which 64 percent of its people participated and voted 99.44 percent to become independent.

A month later, the EU and the U.S. recognized the new state.

However, the then-political leader of Bosnia’s Serbs, Radovan Karadzic, rejected the result and was the political face of an armed campaign which culminated in ethnic cleansing, a return to mass murder in post-war Europe.

But neither during the ensuing war nor during the 1995 Srebrenica genocide of thousands of Bosnian Muslim men and boys did Izetbegovic lose the spirit of resistance.

Support for Izetbegovic and his government came from some unexpected quarters.

In the U.S., one sporting megastar was moved by the suffering of Muslims thousands of miles away in Europe and began rallying support to stop the suffering.

Ali went to the UN on behalf of the people of Bosnia-Herzegovina. He was welcomed by Muhamed Sacirbey, Bosnia's first ambassador to the organization at UN headquarters in New York.

From that time, only one photo remains -- Izetbegovic embracing Muhammad Ali.

Ali did not speak to the media at the time, but the image remained a powerful symbol of resistance.

In November 1995, Bosniaks -- amid international pressure -- stopped the war and signed the Dayton Agreement, bringing peace to the country.

After stepping down as chair of Bosnia’s presidency in 2000, Izetbegovic lived alone on one floor of his house in Sarajevo.

Izetbegovic’s physician, Dr. Enver Raljevic once said the former leader had a lot of visitors, including the High Representative of the European Union to Bosnia and Herzegovina Paddy Ashdown and Sulejman Tihic, chair of the SDA party founded years before by Izetbegovic.

"After saying to his family that Alija's death was approaching, Turkey’s Recep Tayyip Erdogan visited him. The strength he had during Erdogan’s visit was unbelievable," said Raljevic.

Leaving a flag to his country, Izetbegovic died eight years after the Dayton Agreement was signed, in 2003.

The death of Izetbegovic was bitter news as media headlines from that time would prove the sadness and mourning shown by the Bosniak people: "He was the father of the people"; "Without Alija, Bosnia and Herzegovina would not exist"; "Man of Peace dies"; and "Thank you, President".

As per his request, Izetbegovic’s remains were laid to rest in the humble Kovaci area of Sarajevo, with the words "I vow to God -- whose strength is above all -- we will not be slaves" on his gravestone.

"If we forget the genocide done to us, we are compelled to live it again. I shall never tell you to seek revenge, but never forget what has been done," Izetbegovic once told his people.

"To become the teacher of the earth below, one has to become the student of the sky above. Law is not only my profession, but my preference of living and my life's motto.

“We won't seek our future in the past. We won't run after grudge and revenge."

The legacy of the “Wise King” lives on both in his native homeland Bosnia and Herzegovina and across the Islamic world.

“Islam Between East and West”, one of his best-known works, is widely read -- having been translated from Bosnian into many other languages including English and Turkish.

In Izetbegovic’s own words, the book is an “attempt at the translation of Islam into the language which the new generation speaks and understands.”

He contributed profusely to Bosnian civil consciousness, writing several publications and periodicals throughout his career.

Izetbegovic also supported media and press in the Bosnian language, making donations to news outlets such as the daily Dnevni List.

He is remembered inside and outside of his country, with a television mini-series broadcasting in Turkey on his life and deeds.