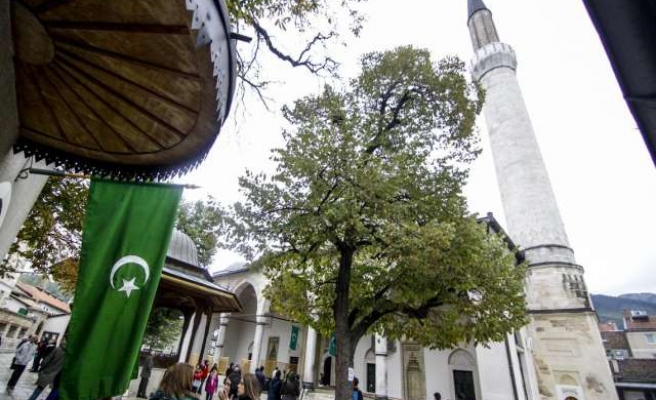 Bosnia and Herzegovina has held a nationwide public holiday and various events to mark Statehood Day - while the Serb entity has shunned the occasion.

Many people took the day off work on Tuesday and celebrated in squares, streets and neighborhoods decorated with the flags of Bosnia and Herzegovina in the capital, Sarajevo.

The celebrations had started the celebrations a day earlier, with about 300 high-ranking international and local officials - including the Turkish, Montenegrin and Croatian ambassadors to Bosnia - attending a reception ceremony at the Presidency Building, from which Serb officials and the Serb member of the Tripartite Presidency were absent.

The first part of the celebrations on Tuesday where entitled "Eternal Flame"  - a memorial service held to mark the military and civilian victims of the Second World War in Sarajevo.

The First President of Bosnia and Herzegovina, Alija Izetbegovic, later laid wreaths at a cemetery memorial service held for those who lost their lives during the defense of Bosnia in 1992-1995.

Tripartite Bosnian Presidency member Bakir Izetbegovic Council said in a statement that the November 25th Statehood Day was one of the most important days in the history of the country.

He said: "I think that, 19 years after the Dayton Peace Agreement, Bosnia and Herzegovina has an authority which is aware of the situation in the country, who supports the sovereignty of Bosnia, who will not have adverse politics and will carry out economic and political reforms."

"Hopefully. we will see the days when Statehood Day is celebrated in the whole Bosnia and Herzegovina," he said.

Government officials also laid wreaths at the Memorial for Children Killed During Siege to commemorate the children killed during the 1992-95 Bosnian War.

Meanwhile, the country's other entity, the Republika Srpska, ignored the holiday.

The new Serb Member of the Presidency Council, Mladen Ivanic, has said at a party meeting on Sunday: "Until we have a basis on state level for any national holidays in Bosnia and Herzegovina, I do not find any reason to celebrate the 25th of November."

The Republika Srpska marks its Statehood Day on November 21, the date the Dayton Peace Agreement was initiated and paved the way for the establishment of the entity.

The Serb entity marks January 9 as its Statehood Day, to commemorate the 1992 declaration of the then-leader of Serbs in Bosnia, Radovan Karadzic, that the republic of Bosnia-Herzegovina had been established.