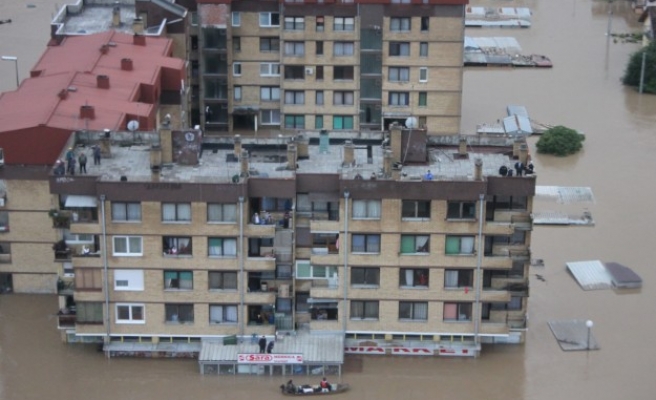 Serbia on Tuesday declared three days of national mourning and reported another death in the worst rainfall to hit the Balkan region in living memory, even as the rising River Sava threatened more havoc.

Prime Minister Aleksandar Vucic said the death toll in the town of Obrenovac, southwest of Belgrade, alone had reached 14.

At least 40 people have died in Serbia, Bosnia and Croatia, after days of the heaviest rainfall since records began 120 years ago caused rivers to burst their banks and triggered hundreds of landslides.

On Serbia's border with Bosnia, the mayor of Mali Zvornik said an "entire hill" was threatening to slide into the River Drina and flood the town and neighbouring Zvornik. Obrenovac was almost deserted, evacuated by police and soldiers on fears of a new flood wave.

In northern Bosnia, the Sava broke sandbag defences overnight and flooded several villages near the town of Orasje.

The government in Bosnia says more than 1 million people, or a quarter of the population, have been affected by the flooding and landslides, comparing the destruction to that of the country's 1992-95 war.

"We need pumps, pumps and pumps," he told a televised cabinet session.

Officials said they believed the Nikola Tesla plant in Obrenovac, 30 km (18 miles) southwest of Belgrade, was largely out of danger. The plant covers roughly half of Serbia's electricity needs, but has been working at only partial capacity, forcing the country to boost imports.

Some Serbian media reports questioned whether authorities had reacted quickly enough to warnings of impending floods, after the skies dumped several months worth of rain on the region within the space of a few days.

Ratko Ristic, a professor at the state Forestry Faculty in Belgrade, said poor coordination, chaotic urban planning and a lack of proper flood-protection mechanisms after decades of negligence were to blame for the devastation.

"The weather conditions were really unheard of in the last 120 years, but the damage wouldn't have been so grave if we took more care of our rivers and if we had a proper flood protection system in place," Risic told state broadcaster Radio-Television Serbia.