'It is a great pleasure to be able to (submit this application) on behalf of the people of Bosnia-Hercegovina ... Croats, Serbs and Bosniaks,' the chairman of Bosnia's tripartite presidency says 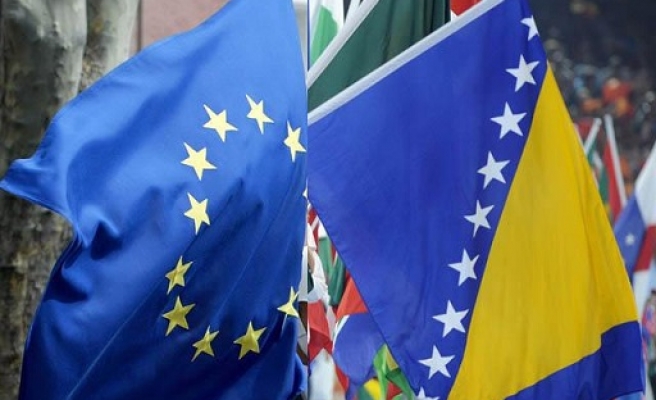 Bosnia on Monday formally submitted an application to join the EU, hoping to catch up with its Balkan neighbours after years lost following the bloody break-up of Yugoslavia.

In the early 2000s, Bosnia appeared set to join the now 28-nation European Union but deep divisions between its Serb, Croat and Muslim communities blocked the political and civil society reforms demanded by Brussels for membership until last year.

Dutch Foreign Minister Bert Koenders, whose country holds the six-month EU rotating presidency, said the EU was happy to see "Bosnia back on the reform path."

"It is urgent to maintain the positive momentum by continuing to implement reforms," Koenders said, stressing that the EU would look carefully at what is would likely take some years.

Dragon Covic, the chairman of Bosnia's tripartite presidency, said: "It is a great pleasure to be able to (submit this application) on behalf of the people of Bosnia-Hercegovina ... Croats, Serbs and Bosniaks."

Covic noted how Croatia had joined the bloc in 2013, while Serbia and Montenegro were now making progress towards membership too.

Facing "years of many challenges ahead," Bosnia needed to improve its economy and show that it could be a "credible" member of the EU, he said.

EU foreign affairs head Federica Mogherini and EU Enlargement Commissioner Johannes Hahn said in a statement that the Yugoslav wars of the 1990s "were one of the most awful pages of European history."

The fact that Bosnia now wanted to join the EU, even when the European project was being tested to the limits, showed how important it was to the future, they said in a joint statement.

"Today we celebrate another step towards a united and peaceful continent. And we need unity in challenging times," it said.

"As some forces across our continent are questioning the very existence of our Union, Bosnia and Herzegovina's application shows that the need of a united European continent is still strong among our peoples."

Bosnia has been deeply divided along ethnic lines since the bitter 1992-1995 war following the break-up of Yugoslavia.