Drawing on a tragic history of war and conflict, a Sarajevo training center sends mine-hunting dogs to global trouble spots 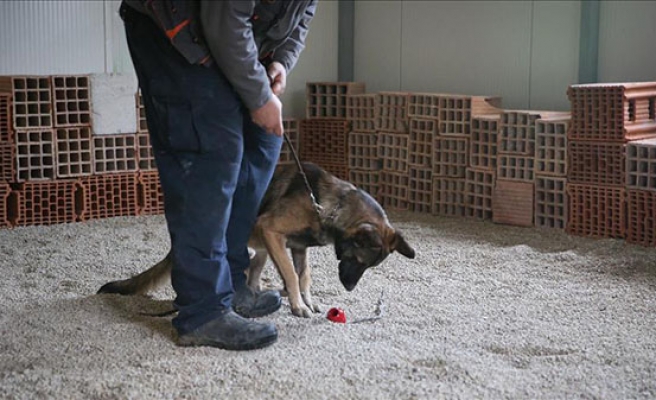 Gordana Medunjanin is a no-nonsense woman with military discipline which she passes on to her top recruits -- specially trained dogs who detect mines and bombs all over the world.

Anadolu Agency visited Medunjanin’s training center on the outskirts of the capital, Sarajevo, where the sound of dogs barking and yelping filled the frosty air.

But, far from being aggressive, the highly-trained canines enjoy the ‘game’ of finding dangerous unexploded mines and booby traps.

More than two decades on from the brutal 1992 - 1995 Bosnian War, thousands upon thousands of landmines planted by various factions at that time continue to pose a life-threatening risk to Bosnia’s citizens.

Around 120,000 land mines and unexploded ordnance still infest the country’s landscape, according to the Bosnia-Herzegovina Mine Clearance Center.

However, despite Bosnia being one of Europe’s poorest countries, it possesses at least one valuable asset -- Medunjanin’s center where dogs get top-notch training in uncovering land mines and unexploded ordnance.

Upon arriving at the center, it is not hard to see that the dogs respect Medunjanin and follow her instructions without a second thought.

The center trains newborn puppies, young and adult dogs up to the final stages when they can be accredited to take part de-mining operations across the world.

Their dogs participate in mine-clearance operations in countries as far apart as Chile, Colombia, Jordan, Senegal, Congo, Cambodia, Ethiopia, Tanzania and many others.

In Sarajevo, there are currently 50 dogs of different ages and breeds undergoing training. The intelligent and highly trainable Belgian Shepherd or Malinois is a particularly sought-after breed for this life-saving work.

"This Global Dog Training, Mine and Explosive Detection Center was established in 2004 by Norwegian People's Aid and since then the center has trained about 500 dogs which are used in mine searching actions in more than 106 million square meters across the world, without a single incident at the mine sites," says Medunjanin.

Medunjanin also says Bosnia is the perfect place to train dogs in mine hunting.

The country’s relatively cold climate and rich vegetation make challenging conditions for the detection of mines and other explosive leftovers from war.

If a dog can reach the required standard in Bosnia, then it can work successfully in warmer countries where the scent of explosives is easier to detect.

Another factor is the exceptional skills of dog handlers in Bosnia.

The dogs in the center are trained for between 15 to 18 months in special mine clearance practice areas before being sent to the field.

As soon as their sense of smell reaches a sufficient level, they are shifted to finding objects buried just under the ground’s surface.

Their hunting instincts strengthen their sense of smell. During training, an object called "Kong", a black or red-colored bouncy robber toy, is used to mimic a real mine.

When the dog finds the ‘mine’, it sits still and focuses its gaze at the right spot on the ground, alerting bomb-disposal personnel to the trap’s location.

Dukic said the dogs in the Bosnian center eventually achieved a 100-percent success rate in training -- never missing a mine.

The Sarajevo center works with the Mine Clearance Unit of the Bosnian army and has supplied the military with 17 trained dogs over the last five years.

Sadly however, as Bosnia is still riddled with mines left over from its war, Medunjanin and her trusty dogs will not be short of practice for years to come.