Wild miners risk their lives to mine 2-3 tons of coal per day to earn 5-10 euros. 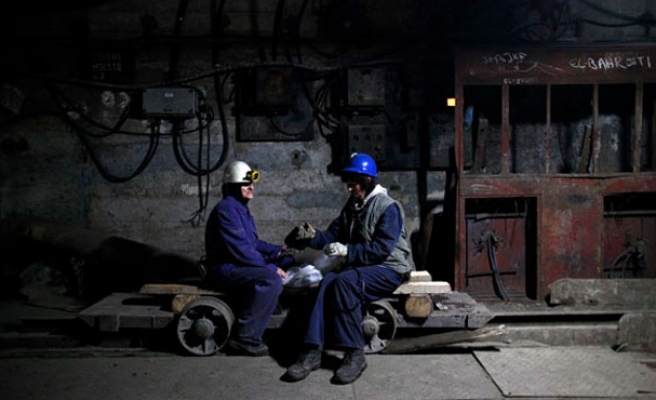 Nearby Zenica, the fourth-largest city in Bosnia and Herzegovina, "wild miners” are illegally mining coal which they can sell for about 5 to 10 euros every day to support their families, as they cannot find any other employment.

With their legs stuck under a few inches of mud, an Anadolu Agency team dragged themselves through the fields and woods of Zenica to a settlement called Lazic to visit these wild miners.

They discovered that the wild miners are simply fathers and husbands who are struggling to support their wives and children by risking their lives in the narrow mine tunnels which they built.

Some of the miners have dug tunnels 100 meters deep to fill old tubs with coal. These tubs are then tied to a tractor to be pulled out.

They use lamps, which only last two hours, on their helmets, and sometimes have to crawl in the mines due to the low height of the tunnels.

Vahid Camcic, who is married and has two children, said that he is unemployed due to the current economic situation in the country and has been working in a mine for around seven years.

"My wife and I are unemployed and we do not have any income. There is no other way to support our family. We are digging the mine by ourselves. We build the tunnels as safe as possible to prevent an accident," said Camcic.

Muamer Dizdarevic has been working as a wild miner for around two years.

"We have no choice. It is not easy, but we have to make money," he said

"There are eight of us in the house and our only income is our mother's pension. My sister is separated from her husband and has a child and I have 3 children and they all go to school," he added.

Dizdarevic said they usually manage to mine 2-3 tons of coal per day, earning only between 5-10 euros. Sometimes, however, they are not even that lucky as they do not manage to mine any coal.

The youngest miner, 19-year-old Husein Dizdarevic, has diploma in power electronics from a vocational high school -- but had to become a miner despite his career ambitions.

"I never wanted to be a miner in my life, but life forced me. My father is against me being a miner, but this is my only option to make money," he said.

Although the police confiscate any coal they sell on the roadside, and criminal investigators are fining them, the wild miners have no plans to give up on their only source of income.