Thousands of Muslim refugees from Srebrenica cannot vote in the town's local election in October, meaning control will likely pass to local Serbs. 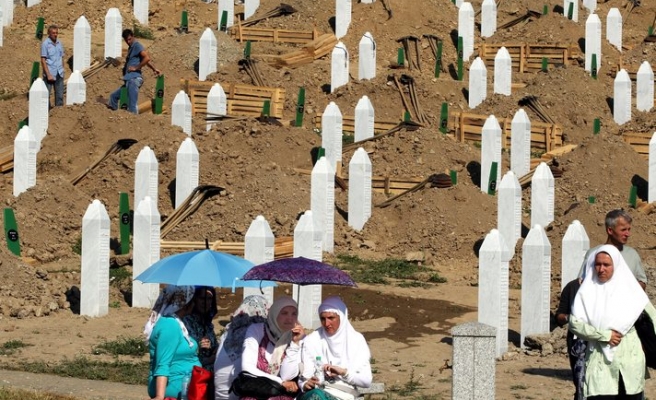 Thousands of Bosnian Muslims prayed with open palms on Wednesday as the coffins of 520 Muslim men and boys killed by Serbs in UN-protected Srebrenica in 1995 and tipped into mass graves were passed overhead through the crowd and finally buried 17 years later.

Draped in green cloth, the coffins were interred under a scorching sun in the Potocari memorial centre in eastern Bosnia at a funeral marking the anniversary of the massacre that brought the number of victims identified and buried to 5,657.

Bosnian Serb wartime commander Ratko Mladic is on trial in The Hague accused of masterminding Europe's worst atrocity since World War Two during Bosnia's 1992-95 war, but for the families of the victims, the search for justice was of little comfort.

"I don't care what happens anymore. There is no verdict that could bring back my son," said Sefika Menakic, 56, whose 15-year-old son Adem was killed as he tried to escape through the hills after Dutch peacekeepers abandoned the town designated as a U.N. "safe haven" to Mladic's Bosnian Serb forces.

Menakic learned three months ago that forensic experts had identified a shoulder bone of her son and several ribs, which she buried on Wednesday.

"It kills me to think he lays there headless," she said. "But at least I know I have a place to come and pray for his soul."

The remains of an estimated 2,400 Muslim men and boys are still to be identified or dug up from the mass graves they were dumped in by Mladic's forces.

"For those who committed this crime, there can be no absolution," said New York Rabbi Arthur Schneier, a Holocaust survivor and the first non-Muslim cleric to address the annual ceremony.

"Srebrenica control to pass to Serbs"

The ceremony was marred by whistling and booing when foreign and local dignitaries arrived, reflecting anger over a ruling that thousands of Muslim refugees from Srebrenica, who no longer live there, cannot vote in the town's local election in October, meaning control will likely pass to local Serbs.

Mladic, the 70-year-old former general of Bosnian Serb forces, was arrested in May last year, hiding in plain sight in a village in northern Serbia.

U.N. prosecutors opened their case against him on Monday at the U.N. war crimes tribunal in The Hague, where Mladic faces a string of charges including genocide for the Srebrenica massacre and the 43-month siege of the Bosnian capital Sarajevo, which killed more than 10,000.

Despite the hot weather, approximately 50,000 people gathered at the cemetery for the 17th year of Srebrenica massacre.

The war in Bosnia that lasted 3.5 years and continued with the "genocide" in Srebrenica came to an end in 1995 with the Dayton Peace Agreement. Around 100,000 were killed, 500,000 women were raped and 2.5 million people had become refugees. Following the ethnic cleansing, almost no Muslim population was left in the cities of Srebrenica, Foca, Zvornik, Bratunac and Visegrad in the east of country.