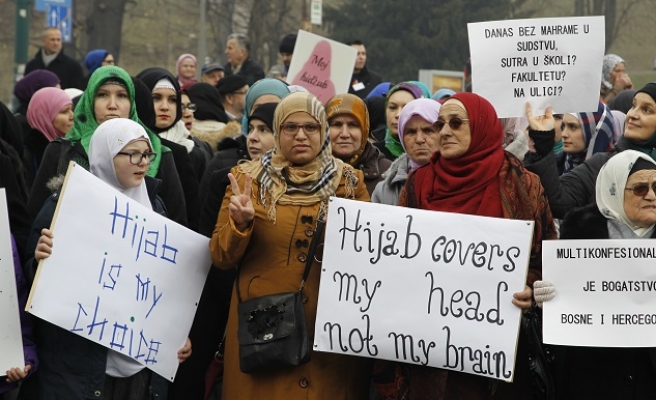 Thousands of people, mostly women, protested on Sunday in downtown Sarajevo against a recent ban on wearing a hijab headscarf in the majority Muslim country's judicial institutions.

"We gathered to protest against prejudices, discrimination and marginalisation," Samira Zunic Velagic, one of the protest organisers, told the crowd.

"The ban of wearing hijab in judicial insititious is a serious attack against Muslim honour, personality and identity, a violation ...  aimed at depriving them of their right to work," she added.

The protest was sparked by a recent decision of Bosnia's high judicial council, a body tasked with supervising the functioning of the judiciary, to ban "religious signs" in judicial institutions.

The decision which concerns judges and other employees in the sector, but does explicitly mention hijab -- a scarf which covers hair, ears and neck -- was strongly condemned by Bosnia's Mulism political and religious leaders as well as numerous local Muslim associations.

The protestors marched for around an hour through the capital's centre carrying banners that read "Hijab is my Daily Choice," "Hijab is my Right" or "Hijab is my Life."

"We came here to say that we are not the victims of this scarf. We came to defend our rights. It is our crown, our liberty, our honour," Elisa Hamovac, a 33-year-old stay-at-home mother, wearing a light blue hijab, said.

Muslims make up around 40 percent of Bosnia's population of 3.8 million and are mostly followers of a moderate form of Islam. The others are mostly Orthodox and Catholic Christians.

Hijab was banned by the communist authorities whileBosnia was still part of the former Yugoslavia until 1992 when it proclaimed independence.

Today many Muslim women wear hijab, with some being completely veiled. However, most are not veiled.