Survivors of the 1995 Srebrenica massacre marched through the hills of eastern Bosnia to re-enact their escape from Serb forces led by General Ratko Mladic, demanding a swift conviction in his genocide trial 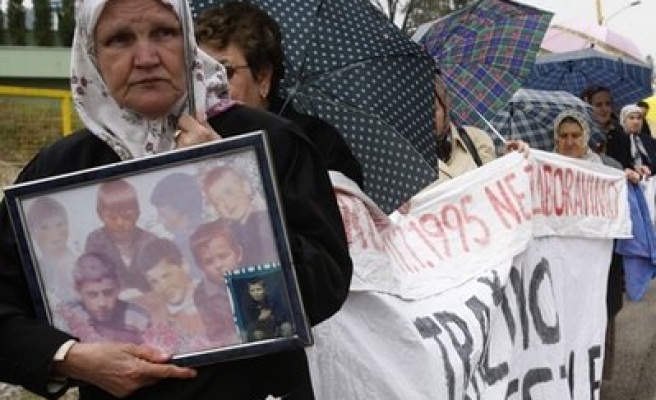 Survivors of the 1995 Srebrenica massacre marched through the hills of eastern Bosnia on Sunday to re-enact their escape from Serb forces led by General Ratko Mladic, demanding a swift conviction in his genocide trial which resumes on Monday.

About 15,000 men and boys managed to escape and fled through the woods, but many were easy prey for the Serb army who shelled and ambushed them or lured them to surrender disguised as U.N. soldiers.

Dzemail Becirovic, 53, was among about 4,000 marchers who marched through the heat on Sunday.

"Once again I feel absolutely the same (as in 1995) and I do not think I will ever forget it. The scenes I have been through haunt me day and night," he said.

"It is good that Mladic's trial will resume ... The sooner the better. I had been convinced for years that he would stay at large, but thank God, the time has come for him to face the crimes he committed."

It took Rasid Dervisevic, 53, seven days of trekking through the dense woods in hunger and fear in 1995 before he reached safety. Every year he joins the 110 km (68-mile) march that starts three days before the July 11 massacre anniversary.

"Emotions are running high. It is like going through the same ordeal again," he said, remembering the 68 men and boys from his village of Dimici near Srebrenica who were killed, including family members.

"Though they did not make it through the hills, each time I pass this route I feel like they are still with me," Dervisevic told Reuters. Seventeen years later, he still has nightmares.

Bosnian Serb army commander Mladic, who personally witnessed the capture of Srebrenica, was arrested in Serbia in May 2011 after 16 years on the run. He is accused of genocide for orchestrating the massacre and for his role in the siege of Bosnia's capital Sarajevo.

His genocide trial at the U.N. war crimes tribunal in The Hague will resume on July 9, with two weeks of hearings scheduled after it was suspended last month because of an error in disclosing documents to the defence team.

But for Dervisevic it comes too late. "Unfortunately, those who stand behind the crimes still deny that Srebrenica was genocide. After so many years, this trial has become a farce," he said.

Radovan Karadzic, leader of the Bosnian Serb government during the 1992-1995 Bosnian war, is also on trial before the war crimes tribunal.

Many Bosnian Muslims hope both men will live long enough to hear their verdict, unlike their mentor, former Serbian leader Slobodan Milosevic, who died in The Hague during his trial.

The remains of 520 newly identified Srebrenica victims, most of them exhumed from dozens of remote unmarked mass graves, will be re-buried during a ceremony on Wednesday.

The International Commission for Missing Persons has so far identified more than 7,000 Srebrenica victims.