Izetbegovic's SDA party, Bosnia's largest, and Covic's HDZ, the biggest party among Croats, have agreed a government deal in the autonomous Federation 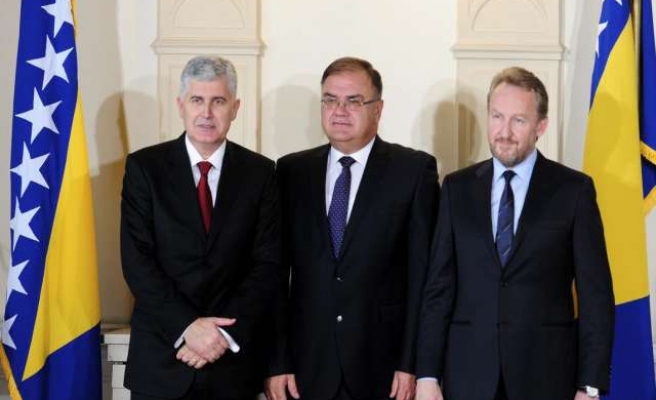 Bosnia's new presidential triumvirate took office on Monday in a first step to forming a government the West hopes will press economic reforms to help unblock stalled efforts to join the European Union.

The presidency comprises a Serb, a Croat and a Bosniak, part of an unwieldy system of ethnic power-sharing laid down in a U.S.-brokered peace deal that ended Bosnia's 1992-95 war.

The presidency is largely ceremonial, but proposes a prime minister to lead the central government spanning Bosnia's two autonomous regions - the Federation of mainly Catholic Croats and Muslim Bosniaks, and the mainly Orthodox Serb Republic.

Nationalists on all three sides - deeply divided over the future of their joint state - won the most votes in an Oct. 12 general election, but must negotiate with more moderate parties to form stable governments at the state and regional levels.

That process took 16 months after the previous general election in 2010.

Britain and Germany hope to recruit the next central government into a new diplomatic initiative to unblock Bosnia's stalled bid to join the European Union, by freeing up funds in exchange for a commitment to broad reforms.

Bosnia's system of power sharing, and its high degree of decentralisation, has left the country hostage to ethnic bickering, blocking political and economic reform.

London and Berlin hope to win the backing of the 28-nation EU for their plan.

"I expect the presidency in the next four years to be a strong engine that will pull the country forward on its reform path to our most important goal," Bakir Izetbegovic, who was re-elected as the Bosniak representative on the presidency, said in reference to EU accession.

His Croat colleague, Dragan Covic, said: "No matter how different are our views of Bosnia and its future, we can reach joint solutions in foreign and domestic policy only through mutual trust."

Izetbegovic's SDA party, Bosnia's largest, and Covic's HDZ, the biggest party among Croats, have agreed a government deal in the autonomous Federation, but are at odds over which Serb party to share power with at the state level.

While the Bosniaks want a strong, more centralised Bosnia, the HDZ campaigned on creating a third, separate Croat entity.