Britain urges Serbia to adjust to Kosovo independence after Germany

Britain stepped up diplomatic pressure on Serbia on Tuesday to focus on its European Union future rather than continue to contest the independence of Kosovo. 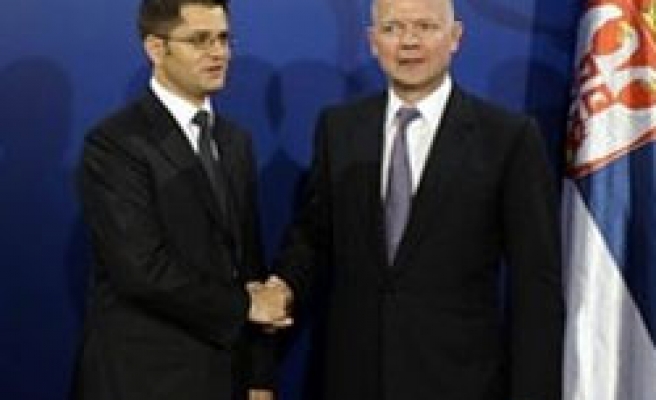 Britain stepped up diplomatic pressure on Serbia on Tuesday to focus on its European Union future rather than continue to contest the independence of Kosovo.

British Foreign Minister William Hague held talks in the Serbian capital days after his German counterpart Guido Westerwelle delivered a message during his own visit that Serbia should acknowledge the reality of Kosovo's independence.

"The place for Serbia and other Western Balkan nations is in the EU," Hague told a news conference. "On the Kosovo issue we have not succeeded in aligning our views but we successfully exchanged opinions. In examining this question, it is important for Serbia to work closely with EU high representatives."

The latest British and German diplomacy comes ten days before the United Nations is scheduled to debate a Serbian resolution on the status of Kosovo.

"What we really need is an agreed text and agreed approach and probably the best way to bring that about is to have a new resolution," Hague said.

Most EU member states and the United States recognise the independence of Kosovo.

Serbia lost control of Kosovo in 1999 when NATO bombed it to halt the killing of ethnic Albanians in a two-year war. After nine years as an international protectorate, Kosovo declared independence in February 2008.

"We are ready to discuss in the best will how to achieve wider support for the resolution, but the option that is not on the table for this government is the option to withdraw the resolution," Jeremic said in a joint news conference with Hague.

EU visits on Serbia came after the International Court of Justice (ICJ) in the Hague, acting at Belgrade's request, issued an advisory opinion in July that Kosovo did not break international law by declaring independence.

Serbia is asking the United Nations in New York to back a resolution that would in effect counter the ICJ opinion.