At least 120 people were arrested after they protested a case that could see the return of historic mosque to country’s Muslim community. 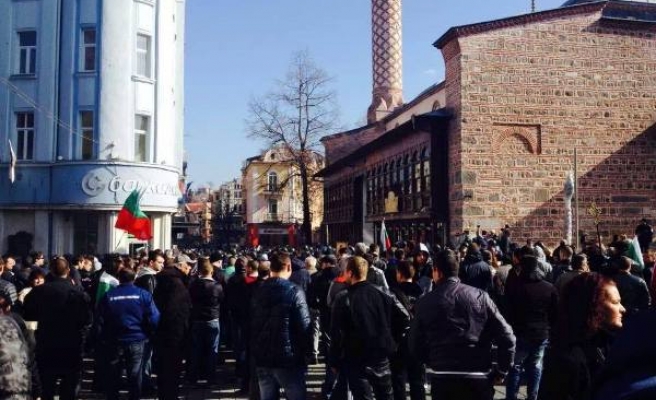 At least 120 football fans were arrested on Friday during a protest against a court case that could see the return of Plovdiv city’s historic Kursin mosque to the country’s Muslim community, according to officials.

“They turned the city into a battlefield,” said Secretary General of the Ministry of Interior Svetlozar Lazarov.

Remarking that the protesters tried to attack Turkey's Consulate General, Lazarov said, “We ensured the safety of the Consulate General thanks to the extraordinary security measures taken by the police.”

Almost 2,000 Bulgarians gathered in front of a court in Plovdiv, on Friday.

The head of the Office of Bulgarian Islamic Affairs, Ahmed Ahmedov, is filing for the return of the 528-year-old Kursun mosque as part of a series of cases requesting the government return foundation properties that were seized during the communist era.

In December 2013, Ahmedov claimed nationalist and racist blocks in Bulgaria have become more aggressive to local and foreign Muslims, since a recent influx of Arab and African refugees into the country.

Another case, for the return of Hamza Bey mosque, was rejected by the Stara Zagora country court in Bulgaria in December 2013.