Protesters have chanted anti-Muslim and Roma slogans and gathered near Sofia's mosque, although government officials say the unrest was not ethnically motivated. 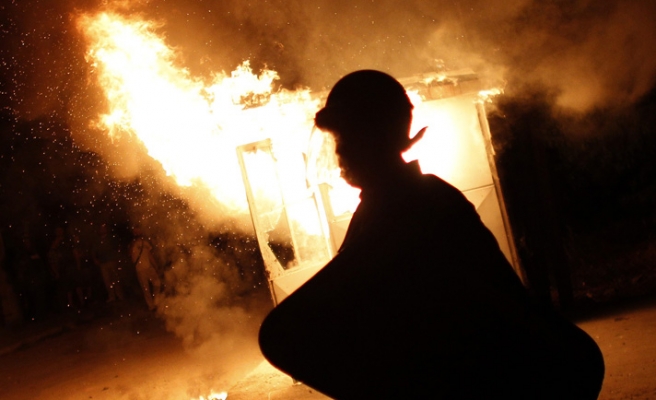 More than 160 people were arrested in Bulgaria during a second successive night of protests against the Balkan country's large Roma minority, the worst violence for 14 years.

The unrest, provoked by the death of a young man which some have linked to a Roma clan leader, highlights tensions in the European Union's poorest country as it struggles to emerge from deep recession.

Hundreds of youths have taken to the streets in 14 towns.

"Gypsy terror: How long will it take, how long we will be quiet!" read a banner at one of the demonstrations in the capital Sofia and other cities in the Balkan country. Police said about 2,200 people took part.

"We have more obligations -- we pay our taxes, we behave normally -- while they (Roma) have more rights," Maria Borisova, who attended the protests in Sofia, told bTV channel.

There has been violence against Bulgaria's Muslim minority this year, but this unrest is the worst since 1997, when an economic crisis and hyperinflation brought Bulgarians into the streets.

About 400 people have been arrested since the weekend, when residents of Katunitsa, 160 km (99 miles) east of Sofia, blamed Roma leader Kiril Rashkov for the death of a 19-year-old man and set alight several of his houses and cars.

Many of them have been released and some were fined for public order offences.

The police said on Wednesday that Rashkov had been arrested and charged with making a murder threat.

Bulgaria's chief prosecutor has called for the quick arrest of people who incite racial and ethnic tension. Roma make up five percent of the 7.4 million population and Muslims, many of them ethnic Turks and some also Roma, account for 10 percent.

Protesters have chanted anti-Muslim and Roma slogans and gathered near Sofia's mosque, although government officials say the unrest was not ethnically motivated.

Many Bulgarian Roma gypsies who live in big city ghettos, often in homes without running water, fear attacks and have stopped their children going to school for a third day.

In the southern city of Dimitrovgad, Roma armed with axes and knives stood up all night guarding their homes and families slept outside fearing attacks on buildings.

Bulgaria has failed to reap some of the rewards of EU membership, becoming blocked from the passport-free Schengen zone due to its high levels of corruption, and the unrest may overshadow a presidential election next month.