With 97 percent of votes counted, GERB had won 32.6 percent, more than twice the share of their Socialist main opponents, but exit polls suggested the party would be left 36-38 seats shy of a majority. 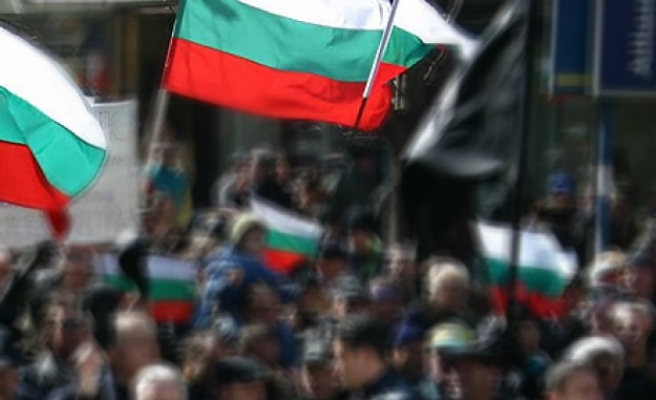 The winner of Bulgaria's general election said on Monday it was ready to form a minority government with the support of other parties, after a fractured result that threatens more instability in the Balkan country.

Led by a former bodyguard and karate expert, the centre-right GERB party won around a third of the vote but is likely to find itself dozens of seats short of a majority. That may leave Bulgaria, one of Europe's poorest countries, with another shaky coalition struggling to solve a bank crisis and revive growth.

A record eight parties were expected to enter parliament, as disappointment with the main parties strengthened the attractions of fringe players.

If a coalition cannot be formed, Bulgarians who have seen their country lurch from one crisis to the next may have to head to the voting booths yet again. The new government will be the fifth in less than two years, during which mass street protests toppled a previous GERB administration and nearly felled its successor.

More instability would also dismay investors. Foreign direct investment has fallen by more than a fifth this year.

In a sign of possible trouble ahead, GERB leader Boiko Borisov warned it would be difficult to form a coalition. Party officials said GERB would look to form a minority government, either alone or with the help of smaller parties.

"We are ready to form a minority government and we expect support from other parties," Rumiana Bachvarova, a senior GERB official, told a news conference. Another senior GERB official warned Bulgaria could have another election by Christmas if cross-party talks broke down.

Underscoring the high level of disillusionment with the political class, the exit polls suggested voter turnout was the lowest in the 25 years since Bulgaria emerged from communism.

"With such a fragmented parliament, it's difficult to form a government and it also raises the question of how stable it will be," said Dimitar Bechev, a political analyst. Bulgarian stocks fell on Monday, bucking a rising regional trend.

"Investors are not excited, for sure, because with a surprisingly big number of parties in the next parliament, the possibility for a reformist majority that can push ahead with reforms is very small," said Dimitar Georgiev, a trader at the Sofia-based brokerage Elana.

A top priority for the new government will be to decide what to do with Corporate Commercial Bank (Corpbank), Bulgaria's fourth-biggest lender, which was closed after a run on deposits in June and whose fate has been in limbo ever since.

The bank's customers have been shut out of their accounts for more than three months and its main shareholder is charged with embezzlement. But efforts to sort out the mess were derailed by political squabbles and it is still not clear whether the authorities will rescue the bank, or how its depositors and bondholders might be treated.

The banking crisis has fed widespread frustration with Bulgaria's politicians.

Seven years after the nation of 7.3 million joined the European Union with hopes of prosperity, corruption remains endemic, while one in five Bulgarians lives below the poverty line. The average salary is just over 400 euros ($500) a month and many Bulgarians have emigrated in search of a better life.

"I am really disappointed with the results. I have no doubts anymore and I'll apply for a green card today," said voter Dimitar Dyankov, who wants to move to the United States. "They'll not be able to form a normal government once again."

While casting his vote, Borisov had said Sunday's poll was a "last chance" to save Bulgaria and warned that if no government was formed and another election was called, "then there will be nothing left to fix in the country".

Bulgaria has been in the hands of a caretaker government since August, following the collapse of a Socialist-led administration whose year in power was overshadowed by mass protests, deadly floods and a row over Russian energy supplies.

"I decided to support some of the new faces. Why vote for those who have robbed us in the past years?" said shop assistant Lyubomira Besheva, in her 30s, at a polling station.

Tucked into the EU's southeastern edge on the Black Sea, Bulgaria left communism behind a quarter of a century ago, but loyalties remain divided between old ally Moscow and Brussels.

Heavily dependent on Russian energy, it is among the countries most vulnerable to a gas supply cut if the standoff between the West and Russia over Ukraine continues into winter.

Bulgaria's new government will have to walk a diplomatic tightrope over the proposed construction of the giant, Russian-led South Stream gas pipeline, which will bypass Ukraine. Under pressure from the EU and the United States, Sofia reluctantly halted work on the project in June.

The next administration will also have to persuade parliament to let the government raise new debt to fund a higher fiscal deficit, provide liquidity buffers for the banking system and plug a large financial hole in the energy sector. To make matters worse, Brussels has frozen hundreds of millions of dollars worth of development funds since last year, citing irregularities in the public procurement process.

"We all know that nothing will change, but the elections are another reason for us to analyse things as we know best: with a salad and a brandy," said Kalin Vasilev in a Sofia pub.

"We know they (the politicians) will lie to us again," he added. "If you took things too seriously in Bulgaria, you'd have to shoot yourself."