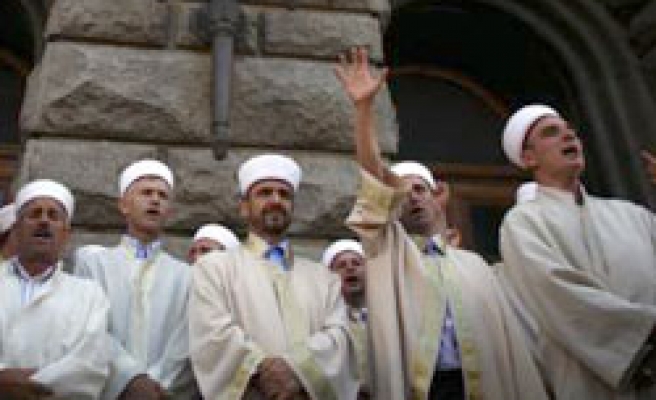 Although the right and freedom of "electing Mufti", which Muslims in Western Thrace have struggled to gain for years, is expected to be returned, this time, the same issue spreaded to Bulgaria that a government led by a far-right partyis in power after recent elections.

Bulgaria fired the chief mufti who elected by Muslims and appointed comunist era imam who was criticised by Muslims during “oppression period”.

This is the latest in a series of protests all around the country against the May 12 ruling of Bulgarian top court which replaced elected mufti Mustafa Ali Hadzhias with state appointed mufti Nedim Gendzhev in a move criticised as a state intervention in religious rights.

In October 2009, the National Muslim Conference decided to elect Mustafa Ali Hadzhi as Chief Mufti. But Gendzev appealed the Conference's vote and the Bulgarian Supreme Court of Cassations decided to reinstate him at the post. Muslims see Hadzhi the only legally elected Chief Mufti in Bulgaria.

A Member of the European Parliament of the ethnic Turkish party Movement for Rights and Freedoms (DPS), Metin Kazak also backed the rally, calling the appointed mufti "communist agent".

Bulgaria's Novinite quoted EP member as saying, "Gendzhev had been Chief Mufti since the time of Communist Dictator, Todor Zhivkov, and an agent of the Communist State Security."

Kazak said, "the Court's rule is a nondemocratic interference in the internal affairs of a legal religion."

The Bulgarian imams further demanded the resignation of the Minister without Portfolio for the Bulgarians Abroad, Bozhidar Dimitrov, over his media appearances and statements in which he failed to honor the will of the Bulgarian Muslims.

The muftis said they are outraged by what they said "state disregard" for their religious rights.

Bulgarian Turks were forced to leave the country during the so-called "revival process" at the end of the 80s. A "revival process" launched by the late communist dictator Todor Zhivkov to forcibly assimilate Muslims culminated with a campaign to force them to change their names, and the exodus of over 300,000 ethnic Turks to neighbouring Turkey in 1989.

According to Amnesty International, at least 100 Muslims died in his four-month campaign to force them to change their names to Bulgarian, which banned the Turkish language in public. It also banned the wearing of headscarves and other Islamic customs such as circumcision and funeral rights.