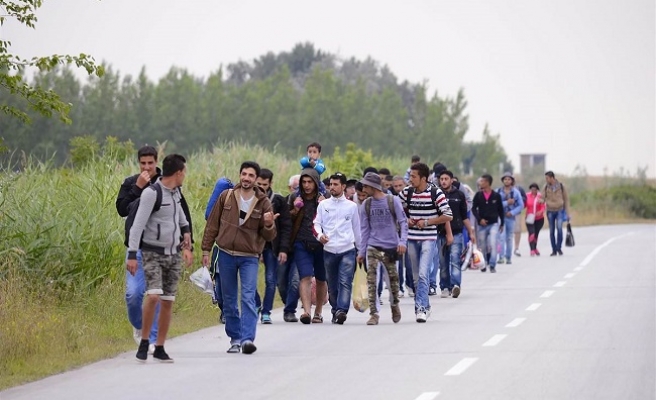 Many Balkan countries have found themselves in the middle of a migrant crisis as people flee violence in the Middle East and Africa as others worry the migrant route to the EU may switch following Hungary’s increased border security.

The flow of thousands of migrants through Greece, Macedonia, Serbia and on to EU member Hungary has created a huge humanitarian problem in southeast Europe.

On June 17, Hungary began erecting a barbed wire fence to stop the flow of migrants into the country, which some observers say could lead to a change in the migration path through the Balkans.

The fence, which will be 3 meters (9 foot) high and 175 kilometers (110 miles) long, when it is completed will be in addition to a new Hungarian border security force.

Izet Nizam, deputy director of the Bosnian Security Ministry’s foreigners’ branch, told Anadolu Agency the road to the EU could move west to pass through Bosnia to EU member Croatia or from Serbia to Romania, also an EU member.

“We are preparing to face the kind of situation that our neighbors are facing now,” he said, adding that Bosnia was ill-equipped to deal with such a huge influx. The country has two centers that can deal with a maximum of 420 people at a time.

Croatian Prime Minister Zoran Milanovic has pointed out that Croatia, like Hungary, is not the intended final destination of most refugees.

He promised Croatia would face up to its obligations and try to help resolve the problem.

The Balkans route, which sees migrants cross from Turkey to Greece, may be less perilous than the Mediterranean crossing from Libya but it still carries a high degree of risk.

Around two million migrants from Iraq and Syria have taken shelter in Turkey. The UN has warned that the number of migrants in Turkey could reach 2.5 million by the end of the year.

The migrants, mostly from Syria, Afghanistan and Iraq, are using Macedonia and Serbia as a corridor to enter the EU.

The rise in migrants entering Macedonia has seen a change in asylum law, with migrants now granted a 72-hour temporary resident permit and free use of public transport, including trains.

Civil society organizations helping migrants previously reported around 600 to 700 migrants entering Macedonia a month. In August, 2,000 people a day were entering the country from Greece.

From reception centers in the south, they travel by train, bus and minibus to the Tabanovtse region on the border with Serbia.

Within the last two months, the Macedonian Interior Ministry has issued temporary asylum permits for 44,414 migrants, including 33,461 Syrians.

Refugees who cross the Macedonian-Serbian border take the Bujanovac and Nis route towards the capital of Belgrade and the onwards to the Subotica region bordering Hungary.

As the number of migrants has risen sharply in recent weeks, they have set up tent cities in Belgrade’s park, living on handouts from volunteer groups and locals.

Serbia says it has little capacity to host the migrants but Serbian Prime Minister Alexander Vucic has promised to set up centers in Presevo and Belgrade. He said around 10,000 migrants entered Serbia from Macedonia last weekend, when the migrant flow reached its peak.