Construction of long-awaited mosque in Albania to begin

New mosque in capital Tirana will be largest in Albania 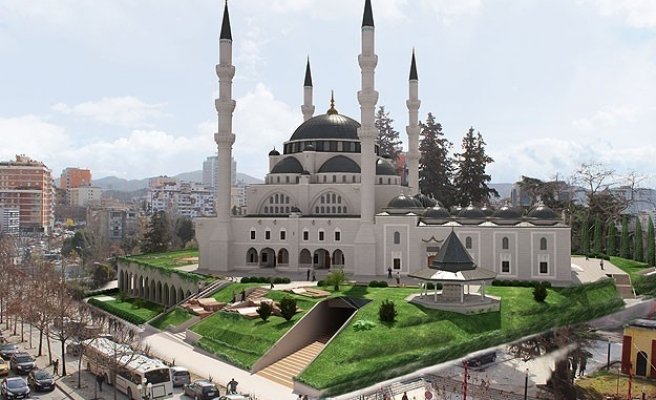 Albanian Muslims have been waiting for a large mosque to be built in the capital Tirana since the 1990s, and their dream is now coming true.

The head of the Albanian Muslim Community, Skender Brucaj, told the Anadolu Agency that all the obstacles for the construction of Albania’s biggest mosque are now over.

Last week, the Prime Minister of Albania, Edi Rama, handed Brucaj the permit for the building.

The cornerstone for the mosque, which is located near Albania’s parliament building, was put in place in the early 1990s, but building did not continue due to legal and financial obstacles.

The large mosque in the Muslim-majority country will finally be built, after the Roman Catholic and Orthodox communities constructed their churches in previous years.

Brucaj said that construction will begin within a short time, without giving an exact date.

“This is a joint project undertaken in cooperation with Turkey's Religious Affairs Directorate,” Brucaj said, adding that the latter will supply the financial support necessary for the building.

In Albania, there is huge demand for this mosque. From 1967 to 1990, the ruling communist party either closed down or destroyed all the churches and mosques in the country, as it was declared an atheist state.

Prime Minister Edi Rama, while handing over the permit for the mosque, said that nearby the new mosque, an inter-religious museum will be built.

Albania is often regarded as a role model to the world for inter-religious coexistence, as Muslims, Catholics and Orthodox Christians have lived in peace for centuries in the country.