A cross, which was erected early on Monday morning on a hill overlooking Sarajevo, has sparked outrage in the country as war-related wounds from the nineties are opened once again. 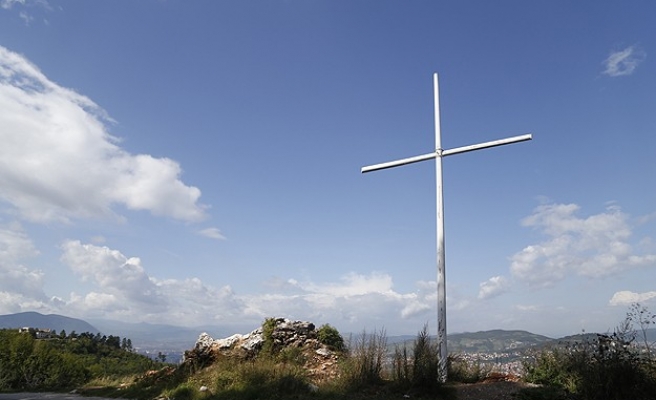 A cross, which was erected early on Monday morning on a hill overlooking Sarajevo, has sparked outrage in the country as war-related wounds from the nineties are opened once again.

Early on Monday morning, residents of the Bosnian and Herzegovina capital awoke to find a cross on the southern hill of Zlatiste, a hill which was used to bomb Sarajevo during the close-to-four-year siege in the early nineties.

Bosniak member of the Presidency of Bosnia and Herzegovina, Bakir Izetbegovic, has said that he considers the cross, which was erected, earlier on Monday morning, on a hill overlooking Sarajevo as "defamation" to the memory of Bosnian war victims.

"Those who want to build a temple or place of worship should not use these to provoke the citizens of other religions, said Bakir Izetbegovic. On the contrary, religious symbols should help us to build a permanent peace and common living areas."

On Monday, police in Sarajevo announced they had detained five unidentified people who had tried to tear down the ten-meter-high cross.

Eastern Sarajevo Public Security Center spokeswoman Danka Tesic told Anadolu Agency that they had later been released since no crime had been committed.

It is still unclear who erected the cross.

"No one consulted our council [about] a cross. Therefore, I think citizens do such a thing on their own initiatives," Vaso Kapor, head of the Trebevic Council of East Sarajevo Municipality said.

The idea of building a cross on Zlatiste hill has been debated for the past decade, especially among Bosnian Serbs.

In the early months of 2014, Branislav Dukic, head of the Association of Bosnian Serb War Victims said that they were planning to build a cross in memory of Serbian war victims.

Sarajevo was under siege from 1992 to 1995 by the Bosnian Serb military forces.

In 1992, in the northwestern Bosnian town of Prijedor and the surrounding area, the Serbian army and military forces committed mass killings of inhabitants and detained Bosnian Croats and Muslims together in the notorious camps of Omarska, Keraterm and Trnopolje.

In July 1995, about 8,000 Muslim men and boys in Srebinica were killed by Bosnian Serb forces.