Konstantinos Katsifas, who had dual Greek and Albanian citizenship, was killed during a shootout with police in the town of Bularat on October 28. 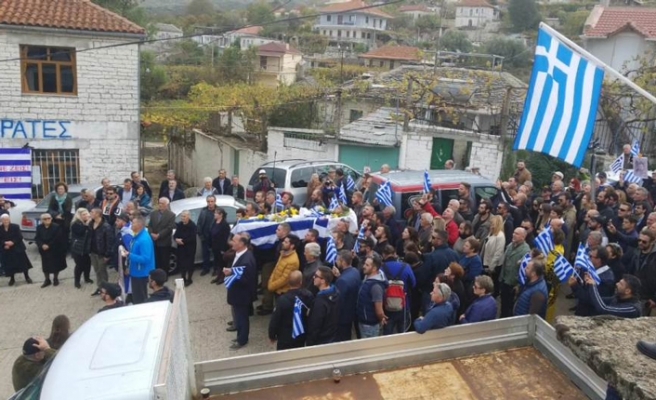 Hundreds attended a funeral in southern Albania on Thursday for an ethnic Greek man who was killed by police there last month, inflaming tensions between Athens and Tirana.

Albanian authorities described the 35-year-old as a Greek "extremist" who had fired a Kalashnikov into the air in the centre of the village, nearby where a ceremony was being held to commemorate Greek soldiers who fought in World War II.

A 30-minute shootout ensued after police tried to apprehend him.

Athens said the loss of life was "unacceptable" and requested a full investigation, while some Greek nationalist groups have protested against the killing, firebombing an Albanian tourism office in Athens.

On Thursday hundreds of mourners carrying white-and-blue Greek flags flocked by bus and car, some travelling from Greece, to Bularat.

Katsifas was carried in an open casket draped with Greek flags as some mourners chanted "Konstantinos, you are alive and leading us!"

A police source told AFP that 10 Greek nationalists were arrested at the border and banned from entering Albania to attend the funeral.

The size of the ethnic Greek minority in Albania is disputed, though a 2011 census put it at 25,000, in an overall population of 2.8 million. They are concentrated in the south.

Some 600,000 Albanians have also emigrated to Greece since the fall of communism almost 30 years ago.

The neighbours have a number of other long-running disputes, including a disagreement over their maritime border, which is believed to straddle lucrative energy resources.

In an illustration of their complex relations, the countries have yet to officially lift the state of war declared in 1940, though both sides have indicated an intention to do so.