Ethnic Serbs set fire to a border crossing post in northern Kosovo on Wednesday after Kosovo's government took control of them, officials said. 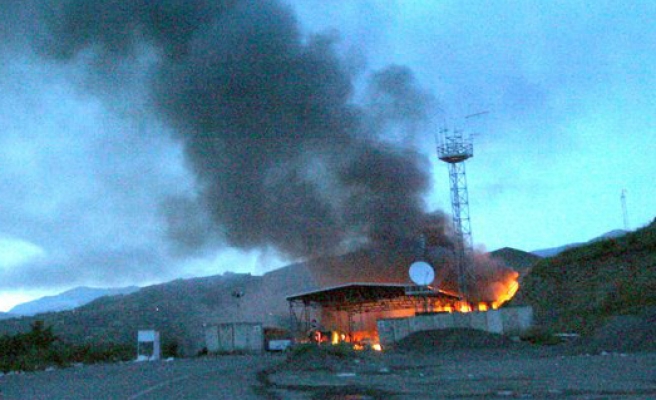 Ethnic Serbs set fire to a border crossing post in northern Kosovo on Wednesday after Kosovo's government took control of them, officials said.

A Kosovo police officer was shot in the head and died on Tuesday in clashes between the police and local Serbs opposed to Kosovo's efforts to take control of its border posts.

Kosovo government mounted the operation in the Serb- controlled north late on Monday to enforce a ban on all Serb products in retaliation for a Serbian blockade on Kosovan exports.

Kosovo has had no control over its northern border posts since 2008, when local Serbs burned them down only days after the independence from Serbia.

The 60,000 Serbs who live in the area just outside neighboring Serbia do not recognise the Pristina government's authority.

"Gate 1 was attacked and facilities were burned," Nicholas Hawton, a spokesman for the the European Union's law and order mission EULEX told Reuters. "No injuries were reported."

Serbia's state-run RTS TV reporter from the scene said US troops from the NATO peacekeeping contingent have entered the burned Jarinje border crossing, about 20 km (12 miles) north of the Kosovo city of Mitrovica.

Serb President Boris Tadic urged Kosovo Serbs to refrain from violence. "The hooligans who are sparking violence are not defending either the people or the Serb state," said a statement from Tadic's office.

A Serb eyewitness said a group of masked men had come from the northern Serb-dominated part of Mitrovica and attacked the Jarinje border post, which consists of two-storey prefabricated buildings and a roofed passageway for cars.

"They destroyed offices and afterwards set them ablaze. They were armed with wooden planks, axes and crowbars," said the witness, who refused to be named for fear of retaliation. "Later a bulldozer was brought to demolish burned buildings," he said.

The witness also said a few Kosovo policemen and customs officer deployed in and around the crossing had to pull out. Many local Serb civilians had also left to avoid being involved, he said.

Serb state-run RTS TV showed footage of the buildings there being engulfed in flames and heavy black smoke billowing over the scene.

The U.N. Security Council accepted a Serbian request for an urgent meeting on tensions in Kosovo after Serbia sent a letter to the 15-nation council requesting an open meeting.

The call was supported by Serbia's ally Russia, which like Belgrade has refused to recognize Kosovo's February 2008 declaration of independence from Serbia.

The council opted for a compromise and scheduled closed-door consultations on Kosovo on Thursday, rather than a public meeting, the diplomats told Reuters on condition of anonymity.