European, Balkan leaders meeting in Brussels have agreed to 17-point plan of cooperation to manage flows of refugees through Balkan peninsula 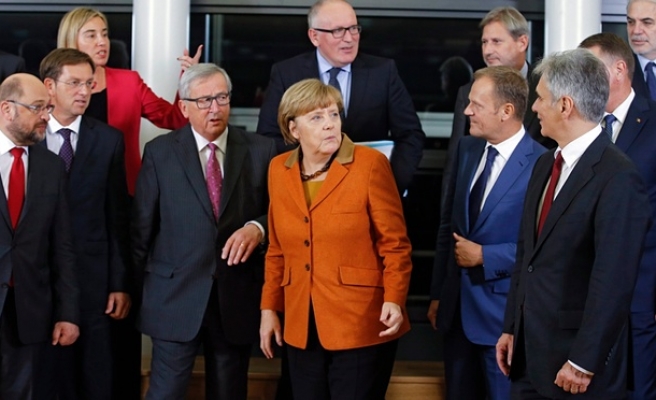 The EU pledged Monday to help set up 100,000 places in reception centres along the refugee route through the Balkans, in a bid to defuse rising tensions on its eastern frontier over how to deal with the crisis.

European Commission President Jean-Claude Juncker made the announcement after emergency talks with the heads of 10 EU nations, including German Chancellor Angela Merkel, plus the leaders of non-EU Albania, Serbia and Macedonia.

"It cannot be that in the Europe of 2015, people are left to fend for themselves, sleeping in fields."

The meeting comes after Bulgaria, Romania and Serbia on Saturday warned they could close their borders to stop them becoming a "buffer zone" for the tens of thousands of people streaming into Europe every day.

More than 670,000 people have reached European soil this year -- many of them fleeing violence in Syria, Iraq and Afghanistan -- in the continent's worst migration crisis since World War II.

"This is one of the greatest litmus tests Europe has ever faced," Merkel told the press conference with Juncker.

Some 3,000 have died making the dangerous Mediterranean sea crossing and, with winter fast approaching, the fear is that more could face the same fate on the land route through the Balkans.

The reception places, to be provided with the help of the United Nations' refugee agency, the UNHCR, will help provide shelter and speed up registration of refugees, Juncker said.

Some 50,000 places will be created across Balkans countries such as Macedonia and Serbia, while the other half will be located in Greece. That includes 30,000 to be made available this year, and another 20,000 will be set up with families or in rental housing subsidised by the UNHCR.

By trying to separate genuine refugees from economic refugees, the centres would also help speed the planned relocation of 160,000 asylum seekers from overstretched Greece and Italy throughout the 28-nation EU.

Most refugees land first in Greece but, desperate to get to Germany and wealthier northern European countries, thousands have pushed on rather than staying there to have their asylum applications processed as is required under EU rules.

Moving up through the Balkans they have overwhelmed many countries, with Hungary clamping down on border crossings with Serbia and then Croatia to halt the flow into the country.

Budapest's move has sparked tensions with Brussels, fellow EU members and particularly its neighbours, with tiny Slovenia swamped by more than 60,000 refugees in recent days.

Fears are rising that the crisis is threatening the cherished "Schengen" system of borderless travel, one of the bedrock achievements of the EU since it was founded in the chaos following World War II.

"Europe has to show itself a continent of values and solidarity," Merkel said, adding: "This evening was a building stone in the edifice."

Slovenian Prime Minister Miro Cerar warned that the EU itself was at stake when he arrived for the talks.

"If we do not deliver some immediate and concrete actions on the ground in the next few days and weeks, I believe the EU and Europe as a whole will start falling apart," he said.

Juncker issued a statement with 17 proposals, including an undertaking that no country will let refugees through to an adjoining state without first getting their neighbour's agreement.

A key element of the plan will be speeding up information exchanges between countries to coordinate efforts, especially on border controls, so as to avoid refugees inundating their neighbours as a result.

"Today we need a dialogue and talks among Balkan leaders to avoid unnecessary possible misunderstandings and tensions in the whole region," European Council President Donald Tusk said as the talks opened.

Turkey, the starting point for most of the refugees, was absent from the meeting but was on leaders' minds, with officials viewing its help as crucial in stemming the influx to Europe.

Ankara has demanded three billion euros ($3.3 billion) a year and visa-free travel for Turks in return for its cooperation.

The 10 leaders from the EU who attended the mini summit were from Austria, Bulgaria, Croatia, Germany, Greece, Hungary, The Netherlands, Romania, Slovenia and Sweden.

The meeting took place amid a clear split in the EU over how to best handle the crisis.

Some see it mainly as a border security problem, while others believe it is a humanitarian challenge requiring the bloc to show solidarity and redistribute refugees among them all.

Germany, which expects up to a million refugees this year, saw 4,000 arrive on Saturday in Passau on the border with Austria.