Ashton said she spoke with Thaci and Tadic, urging them to restore calm immediately with a warning that violence would not be tolerated. 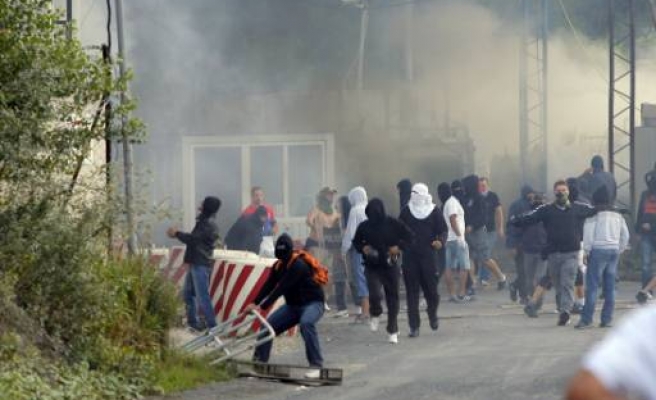 A deadly flare-up of violence in Kosovo's Serbian-populated north has sent tensions with Belgrade soaring and prompted a stern intervention from the European Union.

Kosovo, which has a 90 percent ethnic Albanian majority, sent special police units on Monday to take control of northern border crossings and enforce a ban on imports from Serbia -- retaliation for its block on Kosovo's exports.

Kosovo declared independence from Serbia in 2008 but Belgrade does not recognise the move and the 60,000 Serbs who live in northern Kosovo still consider Belgrade their capital.

One Kosovo police officer was shot in the head and died on Tuesday in a clash with local Serbs. On Wednesday, armed Serbs attacked and burned down the Jarinje border post and fired at members of NATO's KFOR peacekeeping force.

"It was confirmed that an act of arson was committed against that position... There have also been confirmed reports of shots fired at KFOR personnel in the vicinity," KFOR said in a statement.

It did not say whether anyone was injured in the attack or whether KFOR troops had returned fire, but said reinforcements had been sent to the border.

Kosovo's Prime Minister Hashim Thaci accused Belgrade of masterminding the violence. "We will not withdraw, there will be no return under any circumstances and at any price," he said.

He said Serbia was trying to carve out a piece of northern Kosovo, but this will never happen.

Serbia's President Boris Tadic urged Kosovo Serbs to refrain from violence. "The hooligans who are sparking violence are not defending either the people or the Serb state," his office said in a statement.

EU foreign policy chief Catherine Ashton said she spoke on Tuesday with Thaci and Tadic, urging them to restore calm immediately with a warning that violence would not be tolerated.

"I strongly condemn the violence that has taken place in northern Kosovo. These latest developments are unacceptable," she said in a statement.

"It is the responsibility of both Belgrade and Pristina to immediately defuse the tensions, and restore calm and security for everyone."

Belgrade wants to join the EU, but it must mend its ties with Kosovo to speed up its bid to join the bloc. Pristina and Belgrade have started EU-moderated talks aimed at improving trade, movement of people and issues like energy supplies, but negotiations have moved slowly.

Kosovo's police raids on Monday and Tuesday drew criticism from both the United States as the EU, which said the government should have consulted its Western backers.

A Serb eyewitness said on Wednesday that a group of masked men armed with wooden planks, axes and crowbars attacked and burned the Jarinje border post, which consisted of two-storey prefabricated buildings and a roofed passageway for cars.

"Later a bulldozer was brought to demolish the burned buildings," he said.

A cameraman and a sound engineer of Serbia's state-run Tanjug news agency were attacked by Serb hardline nationalists near Jarinje and seriously injured, the agency said.

In a separate incident earlier on Wednesday, an unidentified gunman fired shots at a NATO helicopter, a NATO spokesman said, but there were no injuries.

The U.N. Security Council accepted a Serbian request for an urgent meeting on tensions in Kosovo after Serbia sent a letter to the 15-nation council requesting an open meeting.

The call was supported by Serbia's ally Russia, which like Belgrade has refused to recognize Kosovo's February 2008 declaration of independence from Serbia.

The council opted for a compromise and scheduled closed-door consultations on Kosovo on Thursday, rather than a public meeting, the diplomats told Reuters on condition of anonymity.

Serbia lost its former province of Kosovo in 1999, when NATO waged a bombing campaign to stop Yugoslav leader Slobodan Milosevic from killing ethnic Albanians and carrying out ethnic cleansing in a counter-insurgency war.