Instability fears in Macedonia while an "armed group" is being pursued by police. Four policeman have been seriously wounded, and residents evacuating the northern town of Kumanovo. 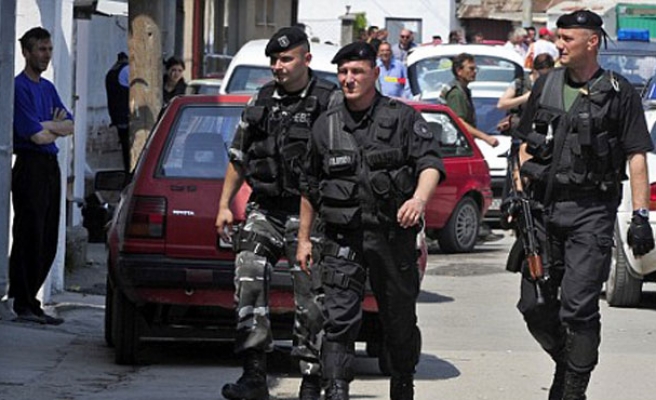 Explosions and heavy gunfire rocked a town in northern Macedonia on Saturday as police moved against what authorities described as an "armed group", heightening fears of instability in the ex-Yugoslav republic after months of political crisis.

Medical workers said at least four officers had been seriously wounded after special police units in armoured vehicles launched a dawn operation in a suburb of Kumanovo, some 40 km (25 miles) north of the capital Skopje in a region that saw fighting during an ethnic Albanian insurgency in 2001.

The mainly Albanian neighbourhood was sealed off to media and intense automatic gunfire and explosions could still be heard more than 12 hours after the operation began.

Helicopters circled the region of some 100,000 people and an interior ministry spokesman said he had information on "casualties" but refused to say how many.

Residents were seen leaving the area laden with bags, some evacuated by police.

"I thought it would never come to this again," an unidentified ethnic Albanian man told Macedonian television, alluding to the 2001 conflict. "It's so scary, we can't stay here."

The events are set to deepen concern in the West over stability in Macedonia, where the government is on the ropes over allegations by the main opposition, the Social Democrats, of illegal wire-tapping and widespread abuse of office.

Protesters demanding the resignation of conservative Prime Minister Nikola Gruevski clashed with police this week and the opposition is threatening to rally thousands on May 17.

Observers fear political leaders on either side may try to stoke ethnic tensions as leverage.

Interior ministry spokesman Ivo Kotevski said that police had acted "on previously received information about an armed group". He told a press conference the gunmen were planning "terrorist acts" and had "infiltrated" the country from a neighbouring state, without saying which.

Opposition leader Zoran Zaev, who has been releasing damaging wire taps he says were recorded by the government and leaked to him by a whistleblower, appeared to suggest Saturday's operation was carried out to create a diversion.

"I call on Nikola Gruevski to immediately ... explain who wants to destabilise Macedonia, why and with what purpose," he said in a statement.

"This dark scenario will not work. The citizens see who has an interest in such a scenario."

An estimated 30 percent of Macedonia's 2 million people are ethnic Albanians. Guerrillas took up arms in 2001, clashing with security forces before the West brokered a peace deal offering the Albanian minority greater rights and representation and the insurgents entered government.