Kosovar FM Hashim Thaci said that he could not give an exact date, but added that Kosovo will apply to the International Court of Justice after evaluating "internal and international circumstances." 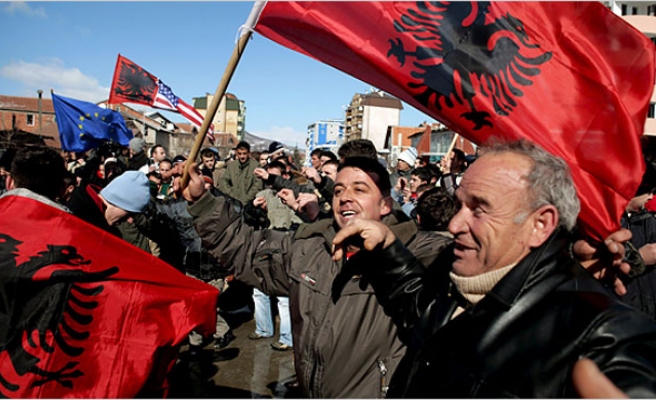 Kosovo’s Foreign Minister Hashim Thaci signaled Friday that Kosovo will ask for “war reparations” from Serbia on charges of genocide during the 1998-99 war.

“We are discussing and working on it,” Thaci, who also serves as Kosovo’s deputy prime minister, told  in an exclusive interview.

Thaci said that he could not give an exact date, but added that Kosovo will apply to the International Court of Justice after evaluating "internal and international circumstances."

Kosovo accuses Serbia of committing genocide during the 1998-1999 war. More than 10,000 Kosovo Albanian nationals are estimated to have been killed by the then Yugoslav forces, while more than 1,700 others remain missing.

Kosovo vs Serbia seems to be the next battle among Balkan countries, which were part of former Yugoslavia. On Feb. 3, the International Court of Justice ruled that both Serbia and Croatia did not commit genocide during the 1990s Balkan wars.

This legal battle began in 1999, when Croatia accused Serbia of ethnic cleansing on its territory during the 1991-1995 war. Serbia responded with a legal case of its own against Croatia in 2010, claiming that over 200,000 ethnic Serbs fled when Croatia started military operations in the region to regain its territory.

But despite Serbia’s and Croatia’s failure to prove their claims, Thaci seems to be confident.

“Serbia has definitively committed genocide in Kosovo,” Thaci, who back in 1999 was the political leader of the Kosovo Liberation Army, said. “We have evidence, we have testimony and the entire world knows.”

“But since Kosovo is not yet part of the UN, we are trying to find legal grounds to charge Serbia with genocide and to prove this to the international justice system,” he added.

Kosovo is a former Serbian province populated by nearly 1.8 million people, over 90 percent of whom are Kosovo Albanians.

It declared its independence on Feb. 17, 2008 and is recognized by 108 countries, including the U.S., the U.K, France, Germany and Turkey.

Thaci said that Kosovo is already recognized by most of the world’s powerful countries and more recognition will come in the near future.

He said that Kosovo will participate in the 2016 Olympic Games in Brazil with its symbols and anthem, after being accepted as a member state of the International Olympic Committee, a move strongly opposed by Serbia.

Thaci said that Kosovo is being prepared to join the Council of Europe and to sign the Association and Stabilization Agreement with the EU.

It is also awaiting a visa liberation decision with the EU’s Schengen Zone. Kosovo is already recognized by 34 of the 47 member states of the Council of Europe.

Kosovo is not a UN member state, because it is not recognized by the UN’s Security Council member states Russia and China.

Thousands of Kosovo citizens have left the country since September 2014, hoping for asylum in EU countries. Many analysts and Thaci himself blame the absence of a new government for around six months after the elections for causing citizens to lose faith in state institutions.

Kosovo held general elections in June 2014, but failed to form a coalition government until December.

Isa Mustafa of the Democratic League of Kosovo party became prime minister, while Thaci, took over the post of deputy prime minister and foreign minister.

Thaci said he finds many reports concerning this issue to be exaggerated, including those saying that tens of thousands Kosovo Albanians have already left.

“No, it is not true that 100,000 people have left,” Thaci said, without giving other figures. “The phenomenon we are facing is similar to the one that other regional countries, like Macedonia, Albania, Montenegro and Serbia, have been facing in the past.”

Thaci added that if one considers proportional ratio per capita, Kosovo would have less leavings than other countries.

Thaci warned Kosovo citizens that their chances to win asylum in EU states are “zero” and that “all those who have left Kosovo to immigrate illegally to EU countries, mainly Germany, “will be repatriated.”

The European commissioner for Neighborhood Policy and Enlargement Negations Johannes Hahn urged Kosovo on Wednesday to strengthen its border and to explain to its citizens that they cannot be guaranteed asylum in EU countries.