Greece banned smoking in all indoor public places again on Wednesday in yet another effort to persuade Europe's heaviest smokers to kick the habit. 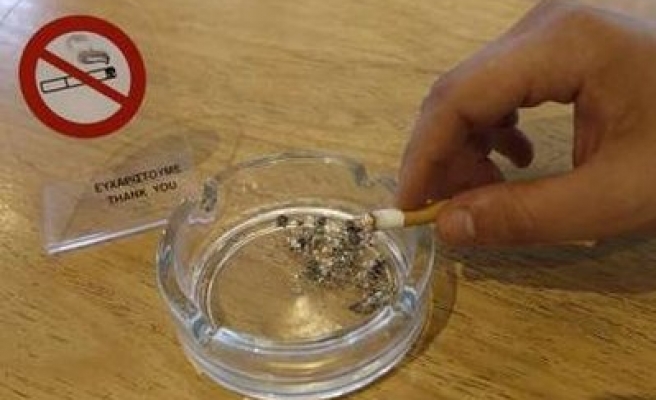 Greece banned smoking in all indoor public places again on Wednesday in yet another effort to persuade Europe's heaviest smokers to kick the habit.

The new socialist government hopes fines and vigilance will work after a similar attempt in 2009 was largely ignored. But many doubt the ban has a chance in a country where more than 40 percent of the population lights up.

"It won't work. No one is willing to quit smoking. It's our mentality. Can you imagine going out, to night-clubs, and not smoking?" said 26-year-old bank employee Iro Karahaliou, puffing away on a bench in central Athens.

As the ban kicked in on Wednesday, smokers filled terraces, balconies and open-air cafes in Athens. The new law forbids smoking in areas such as hospitals, schools, airports, bus stations, taxis, bars, cafes and restaurants.

Inspectors will impose up to 10,000 euros in fines on bar-owners or managers tolerating smoking in restricted areas and up to 500 euros for smokers who break the law.

"Greece is ready for this," said Deputy Health Minister Marilisa Xenogiannakopoulou. "It is a big challenge and I believe we have taken all the necessary steps."

The government says the previous law was weakened by too many exceptions, a reluctance to impose fines and poor policing, but this time around violators will really feel the heat.

Greeks smoke some 32 billion cigarettes annually, spending 4.5 billion euros on the habit, or almost as much as they pay for electricity.

Smoking-related health costs run up to an annual 2 billion euros, according to health ministry data, about 60 percent of total tobacco tax revenues in 2009.

Not even a VAT increase to 23 from 19 percent and a rise in excise taxes on tobacco, part of austerity steps prescribed by the EU and the IMF, has put Greek smokers off.

Austerity-hit businessmen oppose the ban and have asked for a one-year reprieve for restaurants, bars and cafes, and for 1,400 nightclubs to be made exempt altogether.

The health ministry has rejected their request but said casinos and nightclubs bigger than 300 square meters have until June 2011 to comply.

More than 2,500 people have joined a Facebook group opposing the ban -- twice as many as the 1,295 members of a rival Facebook group in favour of the measure.

"We are cutting down on everything due to austerity, and they are asking us to give up smoking?" said saleswoman Eleni Doufekoula, 27, having a cigarette outside her work in central Athens.

"In all this misery, when you go to a bar you want to light a cigarette and have fun. Why go out otherwise?"