Chevron, the first company to begin exploring for shale gas in European Union member Romania, aims to put up more wells in the area 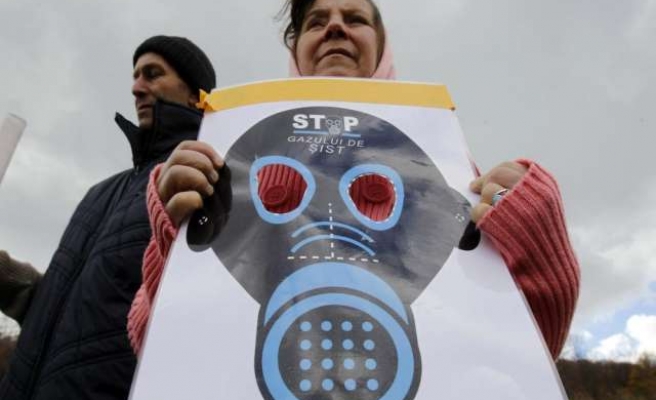 Greenpeace activists chained themselves to the gates of a Chevron shale gas exploration well in eastern Romania on Monday, blocking access to the site and urging the leftist government to ban fracking.

Romania could potentially hold 51 trillion cubic feet of shale gas, which would cover domestic demand for more than a century, the U.S. Energy Information Administration estimates.

U.S. energy major Chevron began work on the exploration well in the village of Pungesti in eastern Romania in December, after postponing operations several times because of protests from hundreds of local residents.

Protesters say they are concerned Chevron will use fracking, or hydraulic fracturing - the process which helps retrieve gas trapped in tight layered underground rock formations by injecting high-pressure water, sand and chemicals.

Critics say it can pollute water supplies and trigger small earthquakes. Advocates say it has a strong safety record and point to countries like the United States, where extensive fracking has driven down energy prices.

Chevron, the first company to begin exploring for shale gas in European Union member Romania, aims to put up more wells in the area and has repeatedly said it does not plan to use fracking under its five-year exploration programme.

On Monday, about 25 Greenpeace activists from Romania, Hungary, Austria, the Czech Republic, Poland, Slovakia and Germany descended on the Pungesti site.

Wearing bright yellow jackets, the activists blocked access to the road and chained themselves to the tall gates, which have barbed wire on top. They waved banners that said "Pungesti-anti-Chevron quarantine area" and "Stop fracking".

Several police officers were sent to the site but have not yet taken steps to remove the activists.

Chevron also has the rights to explore three other Romanian licence blocks, near the Black Sea.