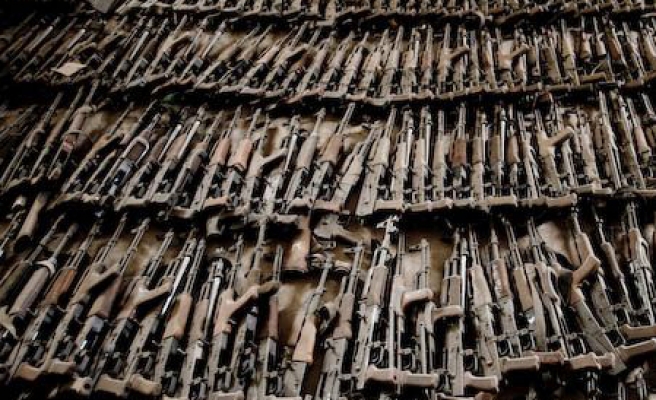 A year after rebel fighters used weapons manufactured in Serbia to gun down victims in Paris, Balkan countries are struggling to end the scourge of illegal arms trafficking.

Months earlier the Kouachi brothers, behind the deadly assault on the Charlie Hebdo magazine offices, carried a rocket launcher from the Balkans, a region littered with weapons since its 1990s civil conflicts.

According to a top French magistrate, Robert Gelli, Serbian citizens come up in nearly a third of international arms trafficking probes carried out in France.

"The weapons getting through to western Europe and the effects they have is still a major problem," said Ivan Zverzhanovski, who leads a United Nations Development Programme project in the Balkans to help combat illegal arms trafficking.

The international monitoring project Small Arms Survey said in late 2014 that an estimated 3.6 to 6.2 million firearms were in civilian possession in the Western Balkans, a region home to less than 25 million people.

In Serbia alone there are between 200,000 and 900,000 unregistered weapons, according to authorities, despite various amnesty campaigns launched since the assassination of reformist prime minister Zoran Djindjic in 2003.

"It is a fact that in Bosnia there are weapons that are not under control and traffickers buy these weapons," Bosnian Security Minister Dragan Mektic told news portal Klix.ba recently, stressing that the problem existed across the region.

Zverzhanovski told AFP that, based on information from law enforcement agencies, a gun bought for 250 to 500 euros on the Balkan black market could sell for 3,000 to 5,000 euros in a country such as Sweden.

The weapons are rarely transported by the truck-load but a few at a time, in private cars or the countless buses that link the Balkans with Western Europe.

Some are sent in pieces to be reassembled later and some are even sent by post, experts say. Smuggling on this micro-scale makes the problem difficult to tackle.

"Until now, no serious groups of arms traffickers have been dismantled in Bosnia," said Jasmin Ahic, an analyst from Sarajevo's faculty of criminology.

The arms have their roots in communist Yugoslavia, where large stockpiles were kept across the federation for use by civilian-staffed "territorial defence" units, designed to defend against a surprise foreign attack.

They ended up deployed in inter-ethnic civil war as the federation collapsed, while more weapons were smuggled into the region to build up armies in the face of international sanctions.

Such arms went untracked in the chaos of conflict until resurfacing again on the streets of Aachen, Stockholm or Paris, where 130 people were killed in the attacks on November 13, 2015.

"The Paris attacks were a turning point on many levels," said Zverzhanovski, referring to growing cooperation within the EU and between Balkan law enforcement agencies.

Serbian and French officials signed an accord in October to form joint teams to investigate arms smuggling, and Belgrade's prosecutor for organised crime Mladen Nenadic said "determination and clarity" were needed to tackle the problem.

In April, 5,000 police officers were mobilised in all former Yugoslav republics in a 48-hour Interpol-led operation -- but it resulted in the seizure of just 40 firearms and six kilogrammes of explosives, along with 22 arrests, according to Bosnian police.

According to Zverzhanovski, efforts are "still relatively ad hoc, case-based," and the EU needs to help to build Balkan police forces' capacity, along with plying political pressure on the region to deal with illegal possession.

"This is the moment to tackle it, before these countries come into the EU," he said, noting that Croatia's efforts on firearms dropped off significantly once it joined the bloc.