The demonstration was held a day after police detained hundreds of undocumented immigrants in the western city of Corinth as part of a nationwide sweep and held them in a former army camp. 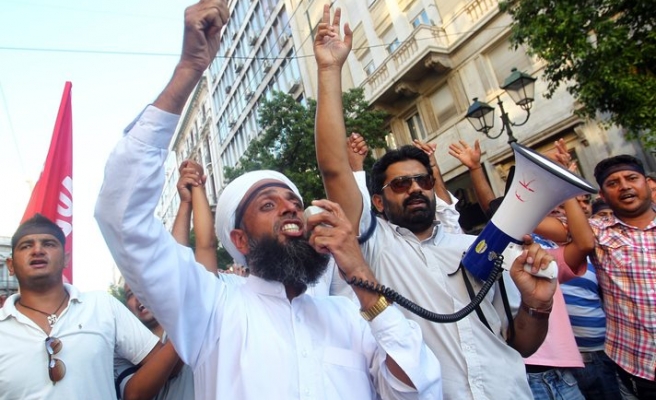 Thousands of immigrants marched in Athens on Friday to protest police sweeps and a rash of racist attacks in Greece as the country struggles to pull itself out of a huge debt crisis.

Greece is a major gateway for mostly Asian and African migrants trying to enter the European Union. They face increased hostility as the country struggles through its deepest post- World War Two recession and record unemployment, propelling the ultra-nationalist Golden Dawn party to parliament for the first time since the fall of a military junta in 1974.

About 5,000 protesters marched to parliament holding banners reading "No Islamophobia" and "Neo Nazis out!" in one of the biggest anti-racism marches in Athens in recent years.

Tensions between immigrants and Greeks have risen sharply in recent months and the demonstration was held a day after police detained hundreds of undocumented immigrants in the western city of Corinth as part of a nationwide sweep and held them in a former army camp.

The move enraged local authorities and residents who rallied outside the army camp to protest against its conversion into an immigrant detention centre.

"We will do everything possible to prevent such a disaster," Corinth's mayor Alexandros Pnevmatikos told Skai TV. "We don't want the camp, which is in the centre of the city, close to densely populated neighbourhoods, to become a holding centre".

Far-right protesters and supporters of Golden Dawn clashed with police at the entrance of the camp on Thursday and hundreds of protesters, including small groups of ultra-nationalists, returned to protest on Friday. Some hurled bottles of water at a conservative deputy visiting the camp.

Police this month launched a sweep operation called "Xenios Zeus" after the ancient Greek god of guests and travellers. They have so far arrested hundreds of illegal immigrants.

Racist attacks against immigrants have increased in Greece since the economic crisis flared in 2009, according to pro-immigrant groups which accuse the police of turning a blind eye.

Human Rights Watch said in a report last month that it had interviewed 59 people who suffered or escaped a racist incident between August 2009 and May this year. But the advocacy group added that the true extent of xenophobic violence in Greece was not clear given many victims do not report the crimes.