Seselj handed himself in to The Hague in 2003, charged with recruiting, financing and inciting followers to commit murder, ethnic cleansing and other war crimes in Bosnia and Croatia. 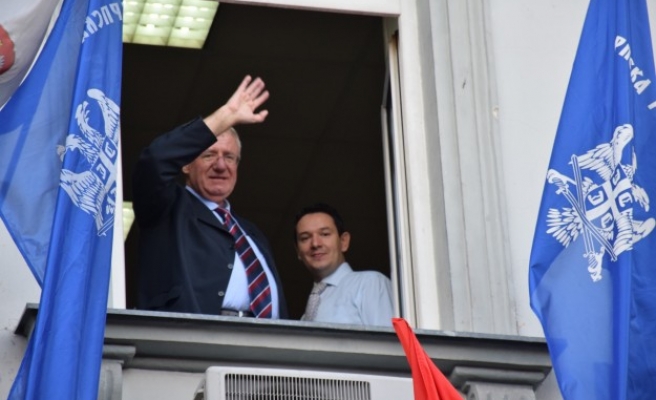 War crimes suspect and former Serbian Radical Party leader Vojislav Seselj - currently awaiting the verdict in his trial in The Hague - has been released by the The International Criminal Tribunal for the former Yugoslavia so he can receive chemotherapy treatment for colon and liver cancer.

More than 1,000 supporters gathered  at the Nikola Tesla airport in Belgrade to welcome Seselj's return from The Hague and chanted "Vojo, Vojo" while holding posters of him and Serbian flags.

Seselj is expected to address the public later in the town of Zemun near Belgrade.

Judges at the ICTY ordered the release of Vojislav Seselj last Friday due to "compelling humanitarian reasons" after Medical Advisory Board members said his life was in danger.

But the President of the Mothers of the Enclaves of Srebrenica and Zepa association, Munira Subasic described his release as showing: "No justice, no rules."

The ICTY has demanded guarantees from Serbia and the Netherlands that they will ensure Seselj returns to The Hague and will not communicate with any alleged former victims or trial witnesses.

Seselj is expected to undergo treatment for between four and six months.

Seselj, the founder and president of the Serbian Radical Party, is alleged to have recruited paramilitary groups and incited them to commit atrocities during the Balkan wars of the early 1990s.

Nikolic and Vucic took power in 2012 and have sought to distance themselves from Seselj, a hardline proponent of the nationalism that fueled wars in Bosnia, Croatia and Kosovo in which in total more than 120,000 people died.

With the defection of Nikolic and Vucic, Seselj's Radical Party - for years the biggest in Serbia - lost its place in parliament. But Seselj retains some support among hardliners in Serbia, who say they will rally in central Belgrade on Saturday.

The charges against him include murder, forced deportation, illegal imprisonment, torture and the destruction of property.

He surrendered voluntarily in February 2003 but his trial did not begin until November 2007.

He was sentenced to a further 15 months in custody on 24 July 2009 for disrespecting the court after publishing the names of trial witnesses on his internet site.