Is being Muslim a crime in Srebrenica?

Due to the negligence of the UN’s Dutch peacekeepers, Serbs did not encounter any obstacle to systematically killing the thousands of Bosniaks they carried to remote buildings and factories by truck 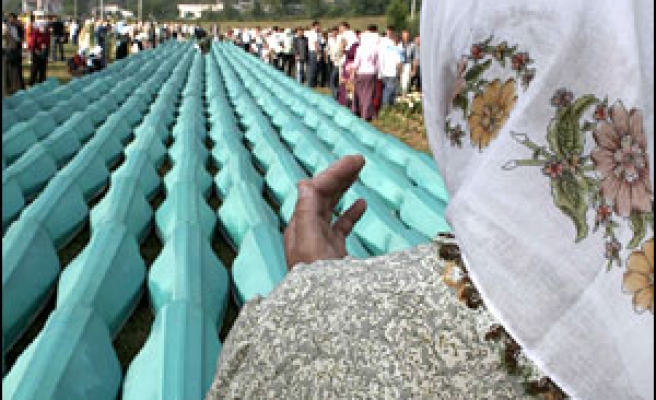 On the 18th anniversary of the Srebrenica massacre, the worst slaughter on European soil since the Nazi era, Bosnian Muslims remember the vicious war days and severe sufferings. Tens of thousands have gathered in Bosnia to express their respect to victims of Srebrenica whose only guilt was being Muslim.

On July 11, 1995, the shelling of the UN safe area of Srebrenica began. Families separated trying to increase their chances of survival. Some sought shelter under the UN flag, at the Dutch peacekeepers' base in Potocari, a village outside Srebrenica which was supposed to be protected by Dutch soldiers in the UN mission. Others headed for the forest, in a desperate attempt to reach free territory, around the city of Tuzla. Serbs massacred more than 8 thousand Muslim men in Srebrenica within 3 days. Since it was ‘under UN security’ Bosnians were asked to leave all their arms and ammunitions, but Serbian militias did not find any hardships in reaching the city.

The military leader of Bosnian Serbs, Ratko Mladic, told the press that day was a sacred day for Serbs since they come to Srebrenica to take revenge from the Turks. He was referring to the Ottoman conquest of Balkans when people living in the region started to convert massively Islam. Yet in Srebrenica there were no Turks. Muslim Bosniaks were the target of the raving Serb general who was captured in Serbia in 2011. The Islamic faith of Bosniaks has led to their being perceived as Turks in the eyes of nationalist Serbs. Srebrenica was serving as a center where the people who were forced to leave their homes gathered. In pre-war times, the population of the city was only 5 thousand, but increased to 20 thousand after the massive flow of displaced people the population. The forced migrants had to live under very poor conditions trying to survive with 2,5 kilograms of food per day.

The nearly 15 thousand Bosniaks who sought shelter in the UN base were disappointed by the negligent stance of Dutch commanders, who said that they were only able to permit 5 thousand people. Most of the Bosniaks outside the camp were slaughtered by Serbs, while some groups headed to Tuzla. The following day Dutch commanders asked Bosniaks to evacuate the camp, a move which Dutch authorities cannot account for to date. The Government of the Netherlands has not accepted that Bosniaks were evacuated from the camp. At the end, Serbs did not encounter any obstacle to systematically killing the thousands of Bosniaks they carried to remote buildings and factories by truck. Later on, they were discovered to have beed killed by a firing squad.

Mourning in Srebrenica after 18 years

As in previous years, Bosniaks came together at the Potocari grave to show their respect to victims and to commemorate the massacre. In the ceremony they reburied 409 newly identified victims. Havva Muhich, mother of the youngest Srebrenica victim ‘Nameless Baby,’ was also among the ones reburied 18 years after her death. 44 of the 409 victims who were reburied this year were teenagers. Rose water was poured in front of the trucks carrying the corpses and coffins which were carried by weeping relatives.

Hundreds of people coming from a three-day walk from Tuzla, a city 150 km away from Srebrenitsa, arrived at the grave with sorrow. Early in the morning, verses from the Quran were read and the massacred victims were prayed for. There are still 1500 unidentified victims.