Karadzic to face The Hague for war crimes

One of the world most evil men, Radovan Karadzic will face the The Hague for his role in the killing of thousands of Muslims in Sarajevo and Srebrenica. 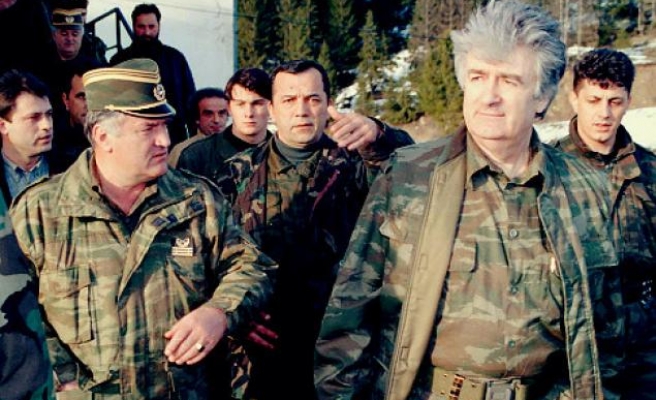 Once-feared Bosnian Serb leader Radovan Karadzic will Thursday stand before UN war crimes judges to learn if, 20 years on, they find him guilty of the worst atrocities in Europe since World War II.

The notorious political leader faces 11 charges of genocide, war crimes and crimes against humanity arising out of the 1992-1995 Bosnian war in which 100,000 people perished and 2.2 million were forced from their homes.

Now 70, he will become the highest-profile politician to be judged by the International Criminal Tribunal for the former Yugoslavia (ICTY), after former Serbian president Slobodan Milosevic died in his prison cell in The Hague in 2006 while on trial.

Karadzic, as the leader of the breakaway Republika Srpska, is accused of taking part in a criminal scheme to "permanently remove Bosnian Muslim and Bosnian Croat inhabitants from territories claimed" by the Bosnian Serbs through a campaign of ethnic cleansing, indiscriminate killings, persecutions and terror.

Karadzic's verdict "will for sure be one of the most important in the history of the tribunal," ICTY chief prosecutor Serge Brammertz told AFP.

It will focus a spotlight on "the responsibility of political leaders for the suffering of their own people," he said.

A poet and a trained psychiatrist, Karadzic notably stands accused of two charges of genocide, including the 1995 massacre in the UN-protected enclave in Srebrenica where almost 8,000 Muslim men and boys were slaughtered in cold blood before being dumped in mass graves.

Significantly, Karadzic is also accused of genocide in several municipalities, including Kljuc and Zvornik.

If he is found guilty on this charge, it will be a landmark ruling at the ICTY.

He is further accused, along with Bosnian Serb military leader Ratko Mladic, of being behind the 44-month siege of Sarajevo when 10,000 civilians including 1,500 children died in a relentless campaign of sniping and shelling.

Once Europe's most wanted man, Karadzic was finally caught in a Belgrade bus in 2008 disguised as a natural healer after 13 years on the run, and transferred to the tribunal.

His marathon trial opened in 2009, when a not-guilty plea was entered on his behalf as he refused to address the court.

During the trial, which ended in October 2014 after an exhausting 497 days in the courtroom, some 115,000 pages of documentary evidence were presented along with 586 witnesses, while court officials recorded some 47,500 pages of transcripts.

Karadzic, whose trademark shock of grey hair has turned white, led his own defence and repeatedly insisted he was a "man of peace" and "a friend to Muslims" seeking to prevent the worst excesses of the conflict.

He maintained he was unaware of the Srebrenica massacre and, while he has apologised to victims and recognised that as the territory's political leader he has "a moral responsibility" for the brutal events, he has insisted he will be acquitted.

"It would be a huge surprise to everyone if Karadzic was completely acquitted, so I am not expecting that," his legal advisor Peter Robinson admitted to AFP.

Indeed, the prosecution has called for a life sentence if he is found guilty, even though to some Karadzic remains "a hero" for standing up for Serbian identity during the wars.

"I think that Karadzic's main goal in this trial was to tell his side of the story and in that way, he was successful, regardless of the outcome," added Robinson.

About 100 representatives from survivors' groups will attend Thursday's judgement, including survivors of the detention camps and the mothers of Srebrenica still mourning their lost menfolk. And they will be keenly watching the second charge of genocide in the municipalities.

"Above all, we want Karadzic to be held responsible not just for Srebrenica, but also for what happened in Prijedor, Vlasenica, Zvornik and all the other places. Without that, whatever sentence is passed will have less value," said Munira Subasic, the head of the Mothers of Srebrenica group.

The late American diplomat, Richard Holbrooke, a chief architect of the 1995 Dayton peace accords that ended the war, once described Karadzic as "one of the worst, most evil men in the world".

A guilty verdict for the two charges of genocide would go a long way towards delivering justice to all victims, experts say.

It would give "the families the acknowledgement and recognition that this most heinous of crimes was committed against them, and also recognise their suffering," Eric Stover, a former war crimes investigator in Yugoslavia, told AFP.