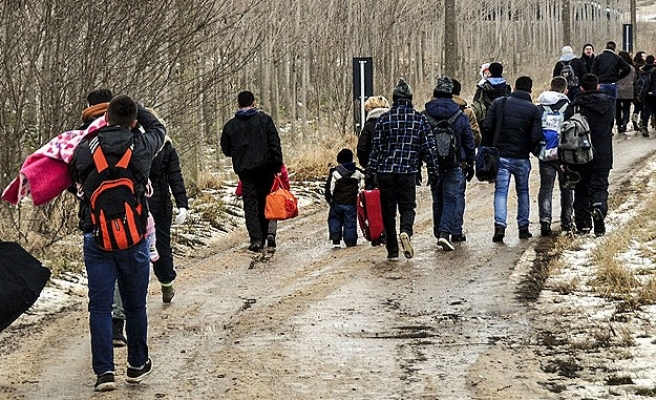 World Bulletin / News Desk
The tough plight of dramatically growing numbers of Kosovars struggling to reach the perceived safety of European nations has been captured on record by The Anadolu Agency.

Women and children are among some Kosovars who pick their way through forests to try and reach their destination, while many others board buses from Kosovo's capital, Pristina, to reach the Serbian capital, Belgrade.

From there, they take a second bus to the north Serbian city of Subotica, where they cross the border illegally into Hungary.

Ismail Avni from Prizren, who was leaving Kosovo with his wife and children, told AA that he had been forced to leave their country through poverty and having no prospects of a better future.

"My daughter is sick, there is no life in Kosovo. Poverty has forced us into this," he said.

Just over 40 percent of people in Kosovo were unemployed in 2013, according to the Kosovo Agency of Statistics, and the figure is believed to have risen since.

Anadolu Agency reporters witnessed the bus station in Pristina buzzing like a beehive full of people, with some arguing with each other as they fought for the few spare seats, are many are often reserved as tickets usually sell out days in advance.

More than 50,000 people are estimated to have left the country since Jan. 1 to head to EU states, with many saying they are fleeing a lack of economic opportunity and unemployment for a better life.

Taxi drivers admitted charging Kosovars higher prices for transporting them from the bus station to motels in Palic, but they also sympathized with them.

Cab driver Zeljko Hajduk, who daily transports people to Palic, told AA: "There is something wrong in Kosovo because, no matter what, even if they get caught and punished, they return to again try and get into the EU.

"I cannot begin to explain how it feels when you see a man of 25 to 30 years old carrying a baby ... who has been forced to move out from his home in Kosovo to reach Europe."

"God forbid that should experience what they experience," he added.

Imer Meto from Pristina said: "My purpose is to take my children to an EU country and leave them there.

"I will go back to Kosovo. I do not even have bread to feed to my children."

Meanwhile, citizens living in villages along the Kosovo refugees' transit route said they worried about the Kosovars' plight.

"They do not create any problems, these poor people. They come all the way here, but they do not know where to go," said Iboja Urba from Palic.

About 600 Kosovars have been arrested over the last 40 days as they were about to cross the border into Hungary and fined 10,000 dinar ($93, or €82), the President of the Subotica Court of Justice has disclosed.

In a bid to stop illegal migration, Kosovo's parliament ratified a resolution on Feb. 5, calling on the government to make more effort to create new jobs, allocate funds to prevent illegal migration and provide customs concessions, among other measures.

Kosovo declared its independence from Serbia in 2008, and has since been recognized by 108 states, including the U.S., Germany, U.K., France and Turkey.

Serbia, together with China and Russia, are among the countries which do not recognize its independence.