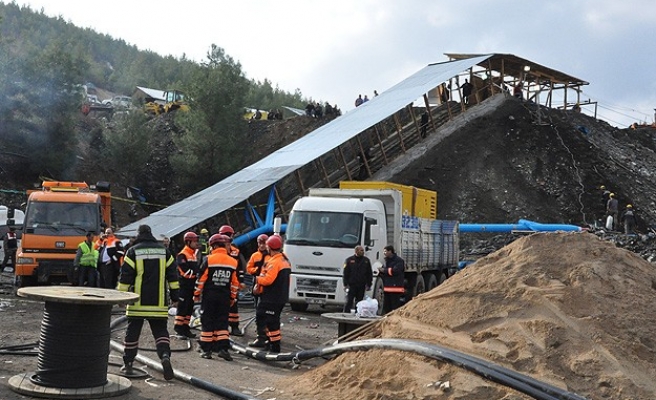 World Bulletin / News Desk
Hundreds of miners in northern Kosovo have refused to resurface, demanding that the Kosovo government takes over their near-bankrupt mine in Mitrovica within 24 hours.

About 700 miners were still 750 meters underground on Wednesday after refusing to return to the surface at the end of their shift the day before, saying they wanted the Kosovo Assembly to take over the company Trepca, which owns the zinc and silver mines, as soon as possible.

The Director of the Government Office for Kosovo and Metohija. Marko Djuric, attacked the miners' action, saying: "It is a unilateral seizure and confiscation of Trepca, which is in 100 percent ownership of its company."

"For something like that. there is only one word; robbery."

Other miners were joining the protesters on Wednesday amid fears the mining firm could be bankrupted under what Kosovo Prime Minister Isa Mustafa has said are debts totaling €1.4 billion ($1.6 billion).

The protesting workers called on the Kosovo Assembly to issue a law to nationalize the Trepca mine within a day.

Kosovo's new government said last week that would take control of the Trepca mining complex through nationalization, but reversed its decision on Monday following a furious response from Serbia and intense discussions with Western diplomats.

The Serbian government, which refused to recognize Kosovo's 2008 declaration of independence, insists the majority ownership of the mine complex belongs to the Development Fund of the Republic of Serbia.

Belgrade has warned that any attempt by Kosovo Government to take over the mine would jeopardize EU-mediated talks between the two sides.

The Serbian government expects the dispute over the Trepca mine, which straddles the border between Kosovo and Serbia, to be discussed under continuing negotiations on the implementation of the Brussels agreement on normalizing relations between Belgrade and Pristina.

The Kosovo government claims the mine company should be under the control of Pristina, while officials in Belgrade state it is 56 percent-owned by the Serbian Development Fund and Kosovo has no right to claim ownership.

Trepca has two mines in northern Mitrovica, an area with a dense Serb population.

While the two mine shafts are managed by Serbs, one in southern Mitrovica is managed by Albanians.

The Trepca company was the major mining operation in the former Yugoslavia, extracting 70 percent of the country's mineral output.