Heavily armed troops of NATO's KFOR force also sealed off the two crossings in an attempt to preempt any violence. 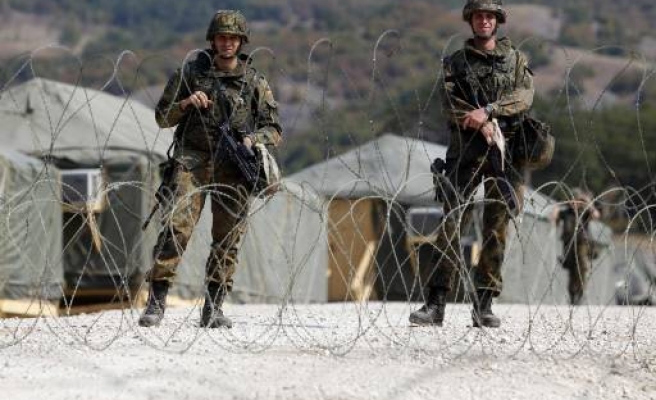 Kosovar and European Union police and customs officers deployed at two contested border crossings with Serbia in the Serbs north of the country on Friday, an official said, amid concerns that the move could provoke ethnic violence.

Heavily armed troops of NATO's KFOR force also sealed off the two crossings in an attempt to preempt any violence.

"Mixed teams are on the border. They were sent in by helicopters," Kosovo's Interior Minister Bajram Rexhepi told Reuters.

The Pristina government wants to reinstate its presence in the largely lawless northern area which pledges its allegiance to Belgrade, three years after Kosovo -- which has an Albanian majority -- declared independence from Serbia.

Kosovo Prime Minister Hashim Thaci said the action was not aimed against any ethnic group, including the Serbs from the north. "I call on Belgrade to finally abandon its desperate attempts to destabilise the region and accept once and for all that Kosovo is independent, sovereign and undivided," he said.

In July Pristina tried to install police and customs at the two crossings, previously staffed mostly by ethnic Serbs. However, armed Serbs drove them back, leaving NATO soldiers scrambling to intervene. One ethnic Albanian policeman was killed during the riots.

Belgrade, which opposes Kosovo's independence, has warned that the takeover of the crossings could lead to clashes but appealed on Friday for calm.

All traffic between Kosovo's north and Serbia has been halted and the Jarinje border gate, 100 km (60 miles) from Pristina, which was torched by Serb extremists during the riots in July, was surrounded by barbed wire and sandbag bunkers.

The German troops in Jarinje also put up a sign warning that they would fire on any trespassers. At least six armoured personnel carriers were deployed.

The EU police and justice mission, EULEX, has also deployed its own police and customs officers at the two crossings to combat widespread smuggling.

"This is fully in line with the EULEX mandate and the aim is very clear -- we want to see the rule of law in Kosovo," said Maja Kocijancic, a European Commission spokeswoman.

Kosovo Serbs maintained their barricades along the roads leading to Jarinje and another boundary post, the Brnjak, about 100 km (60 miles) to the northwest, to prevent movements of EULEX and NATO troops.

Later on Friday, Serbs also brought trucks to Jarinje and Brnjak gates and started unloading hundreds of tons of gravel around NATO positions, forcing KFOR to use helicopters to bring in reinforcements and supplies, a Reuters witness said.

Serbia cherishes Kosovo as its historic heartland and most of its medieval monasteries and churches are there. It lost control over Kosovo in 1999, when a NATO bombing campaign halted a Serb counter-insurgency war against ethnic Albanian rebels.

Belgrade is under pressure to mend ties with Kosovo to gain EU candidate status, a step to eventual accession. But the Serbian government also has one eye on a parliamentary election due next year and Kosovo is high on its agenda.

Since 2008, the new state of around 1.7 million mostly ethnic Albanians has been recognised by more than 80 countries, including the United States and most of the EU.