Albin Kurti, who last week released tear gas in Kosovo's parliament in protest at agreements reached with Serbia, was held in police station in downtown Pristina for questioning 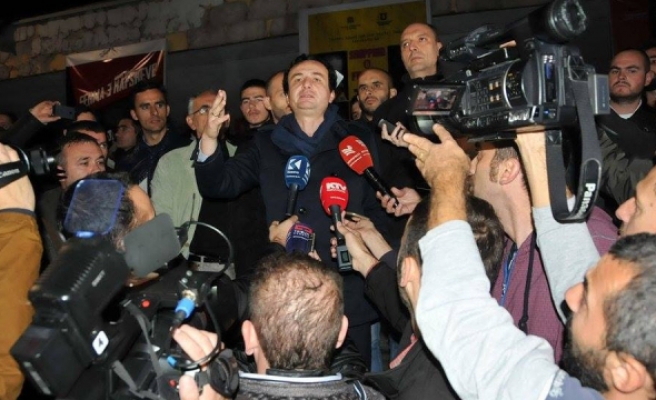 Kosovo opposition politician Albin Kurti has been released from detention after protesters and police clashed over his arrest in the capital Pristina. Kurti was released early Tuesday morning.

Police in Kosovo fired tear gas Monday night on dozens of protesters who threw stones and smashed windows after a leading opposition MP was taken in for questioning.

Albin Kurti, who founded the Self-Determination party and last week released tear gas in Kosovo's parliament in protest at agreements reached with Serbia, was held in a police station in downtown Pristina for questioning, police said.

While he was being held, around 200 protesters, including opposition MPs, were seen gathered in front of the station hurling stones and smashing its windows.

Kurti was later released and told his supporters he would see them at the next rally. "We will not give up. Let's stay united," he said.

The MP has been leading opposition to Kosovo's dialogue with Serbia -- particularly a recent accord in which Pristina agreed to give more financial and legislative rights to its minority Serb community.

The opposition believes the move to set up an association of Serb-run municipalities will deepen the ethnic divide and increase Serbia's power in Kosovo.

Along with releasing tear gas, opponents of the deal have blown whistles and thrown eggs to disrupt recent parliamentary sessions.

The government and foreign embassies condemned the incident in parliament on Thursday, when saw Kurti opened a tear gas canister and kick it around the floor of the chamber, causing two MPs to faint.

Kosovo, whose population is predominantly ethnic Albanian, declared independence from Serbia in 2008, but Belgrade fiercely rejected the move and still considers the breakaway territory as its southern province.

Kosovo and Serbia were at war in 1998-1999, which ended after Serbian armed forces withdrew from the territory following an 11-week NATO bombing campaign.