Kosovo: Police use tear gas to disperse thousands in capital

100 injured at rally in which protesters called on a minister to resign and for Trepca mine company to be nationalized. 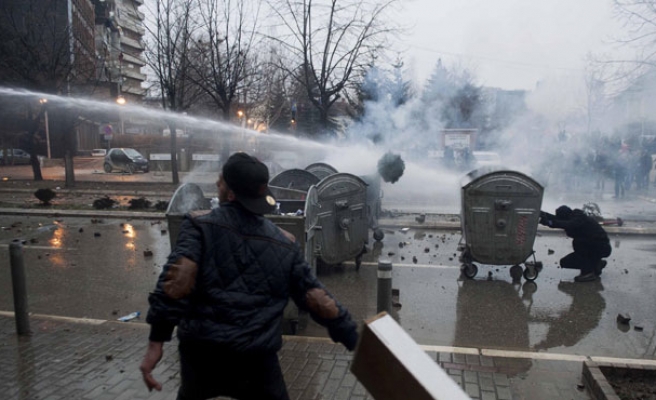 Thousands of people have protested in the Kosovar capital of Pristina, calling for the resignation of government Minister Aleksandar Jablanovic and the nationalization of Trepca mine company.

Earlier, police had erected iron barricades to block access to a nearby government building.

The Serbian government, which refused to recognize Kosovo's 2008 declaration of independence, insists the majority ownership of the Trepca mine complex belongs to the Development Fund of the Republic of Serbia.

Earlier in January, Kosovo adopted amendments to its existing laws on public enterprises -- which technically allowed it to fully nationalize Trepca -- but backtracked after Serbia reacted furiously to the plan and alarmed Western diplomats.

The clashes continued until evening. Demonstrators returned and threw stones. rods and other objects at police. Special police units dispersed the demonstrators with tear gas and water cannon.

Police said about 100 people were injured, 72 of them police officers. They said 160 demonstrators were taken to the police station for questioning and further legal procedures.

Also, 26 people sought medical help, according to the Emergency Center.

Kosovo President Atifete Jahjaga urged people in a written statement to keep order in the streets and squares, and to maintain peace.

"I call on the protesters who remain on the streets of Pristina to disperse peacefully and not to continue with the conflict with Kosovo police, the institution responsible for maintaining law and order and to ensure every citizen of the country," the president said. "This is our police."

She also called on all political leaders and political parties in the country to talk, find common ground, and stop the cycle of violence.

Jahjaga said chaos and violence on the streets of Pristina were unacceptable.

At a press conference, Prime Minister Isa Mustafa read a government statement condemning the violence by demonstrators. Mustafa said he believed the protest was intended to topple the government.

The clashes caused considerable damage to vehicles and police equipment.

Twelve people were injured and 22 were arrested in an similar protest Saturday that was aimed to set a deadline of 48 hours to replace Jablanovic.

In early January, Jablanovic called Kosovars "savages" who prevented Serbs from entering a church in Cakovice in the west of the country.

Although Jablanovic later apologized, he was condemned across the country, with many people calling for his resignation.

On Wednesday, about 700 miners who were about 750 meters underground refused to return to the surface at the end of their shift, saying they wanted the Kosovo Assembly to take over the company, Trepca, which owns the zinc and silver mines.

Miners ended their strike at the near-bankrupt mine after the prime minister urged them to stop.