Despite heavy security at the entrance to parliament, opposition MPs subsequently opened two tear gas canisters in the chamber, forcing deputies to evacuate the hall 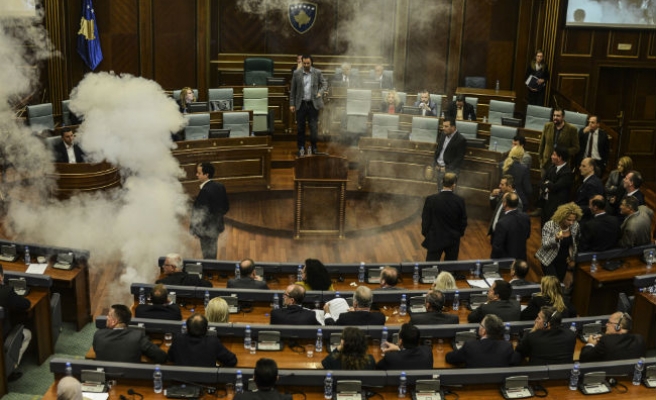 Oppositions lawmakers released tear gas in Kosovo's parliament on Friday trying to prevent the election of a new president, while crowds of anti-government protesters rallied outside the building.

Foreign minister and former premier Hashim Thaci is the frontrunner to become Kosovo's head of state, who is chosen by parliament. But the united opposition bloc and its supporters vowed to scupper Friday's vote with their protests inside and outside the legislature in the capital Pristina.

Kosovo, which broke away from Serbia eight years ago, has faced a political crisis in recent months with opposition members of parliament almost paralysing the legislative work with regular tear gas demonstrations in the chamber.

Protesters have also taken to the streets calling for the government to step down and hold early elections, amid widespread frustration over alleged high-level corruption, around 40 percent unemployment and a government deal with Serbia.

"Hashim Thaci's past, and his present, are damaging for the Republic of Kosovo. If you are unhappy with this government, go out on the streets and protest," Visar Ymeri, head of the Self-Determination party, told lawmakers during the pre-election debate.

Despite heavy security at the entrance to parliament, opposition MPs subsequently opened two tear gas canisters in the chamber, forcing deputies to evacuate the hall and the parliamentary speaker to call a short break.

Outside in the rain, about 1,000 demonstrators surrounded the building chanting "Out", "Hashim out", while about 200 anti-riot police officers with shields guarded the cordoned-off entrances.

Hundreds of protesters had pitched tents in the centre of Pristina earlier this week, pledging to demonstrate around the clock in an attempt to oust the government and prevent Thaci's election.

"Thaci did nothing for eight years as prime minister to resolve unemployment, nor did he even attempt to improve the economy. It would be a disaster for Kosovo if he is in power for another five years," said Agron Mustafa, a 29-year-old unemployed lawyer.

Opposition leaders are particularly furious over a government deal with Belgrade, brokered by the European Union, to create an association giving greater powers to Kosovo's Serb minority -- a move they fear will increase the influence of Serbia.

The deal was reached during talks to "normalise" relations between Kosovo and Serbia after the two sides fought a war in the late 1990s.

Improved relations are a key requirement for both sides to join the EU, and Thaci has taken a leading role in the dialogue with Serbia, which does not recognise Kosovo's sovereignty.

Along with Thaci, his close party associate Rafet Rama is running for Kosovo's top job.

A candidate needs support from two thirds of the 120 MPs to be elected president, and if there is no winner after three rounds of voting then parliament must dissolve itself and organise snap elections within 45 days.

The final deadline to choose a president is March 7.

Proceedings eventually resumed with 18 opposition MPs banned from them.

The government and international observers, including the US ambassador to Kosovo, have repeatedly denounced the opposition's method of protest.