Kosovo voted in an election marked by voter frustration over poverty and corruption six years after seceding from Serbia, testing Hashim Thaci's bid for a third term as prime minister 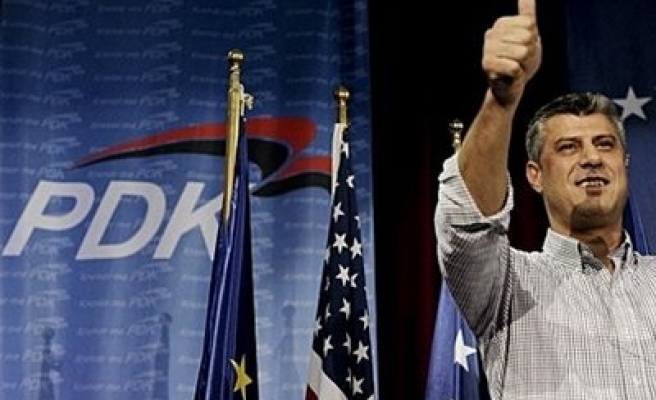 Kosovo's ruling party of Prime Minister Hashim Thaci declared it had won a third term on Sunday in an election marked by a low turnout among Kosovars frustrated with widespread poverty and corruption.

A partial official vote count put Thaci's Democratic Party of Kosovo (PDK) on 31 percent, ahead of its arch rival in the Democratic League of Kosovo (LDK) on 25 percent. Projections by two non-governmental groups gave the PDK a similar margin of victory.

Thaci is likely to form a coalition government with smaller parties and ethnic Serbs to secure his third four-year term in power, but his dependence on others could hamper his ability to govern effectively.

Turnout of only 43 percent reflected widespread frustration among the Balkan country's 1.8 million people at the lack of progress made since Thaci presided over the territory's secession from Serbia in 2008.

"Our party is the biggest winner of the national election," PDK deputy leader Kadri Veseli told a news conference. "Kosovo today spoke with one voice and confirmed the European future of our children."

Fifteen years since breaking away in war, Kosovo ranks among Europe's poorest countries. A third of the workforce is unemployed and corruption is rife.

"This old class of politician has been around for 15 years and had plenty of time to profit," said Muhamet Maqastena, a trader in the capital, Pristina. "It's time for them to go and let the young, educated people govern us."

Thaci was one of the leaders of the Kosovo Liberation Army that took up arms in the late 1990s to break free from the repressive rule of Serbia under strongman Slobodan Milosevic.

NATO intervened in 1999 with 78 days of air strikes against Serbia, trying to halt the massacre and mass expulsion of Kosovo Albanians by Serbian forces waging a counter-insurgency.

Kosovo declared independence almost a decade later and has been recognised by more than 100 countries, but not Serbia or its big-power backer Russia, which is blocking the young state's accession to the United Nations.

Its economy is forecast to grow by at least 3 percent this year, driven by construction and cash sent home by Albanians working abroad. Even that, however, is not enough to absorb the thousands of jobseekers entering the workforce every year in what is Europe's youngest society.

He has promised to do the same every year if given a new term. At 43 percent, turnout was down on the past two elections in 2007 band 2010, when 54 percent and 48 percent of eligible voters cast their ballots.

Valbona Bajraktari, a 37-year-old unemployed woman, said her expectations were not high. "The only thing I want is for them not to steal or to hire their aunts," she told Reuters.

As many as 30,000 national and foreign observers have been assigned to monitor the elections all across the country.

A total of 1,235 candidates from 30 political movements are running in the elections, including five Serbian, six Bosnian and two Turkish parties.

Kosovo Democratic Turkish Party have 50 candidates for the parliamentary seeats while the Turkish Justice Party of Kosovo entered the elections with 24 candidates.

There is a threshold of five percent for the political parties in Kosovo to win seats at the parliament. Ten seats are allocated each for the Serbian minority and the other minority groups.

Today's polls mark the first elections to be held all across Kosovo including Serb majority municipalities, after Belgrade and Pristina signed a "breakthrough" agreement last year.

The agreement, hailed by the EU, allows holding elections in all parts of Kosovo, the establishment of an association of Serb majority municipalities, and the gradual integration of the judiciary and police administrations in northern Kosovo into the country's legal and administrative framework.