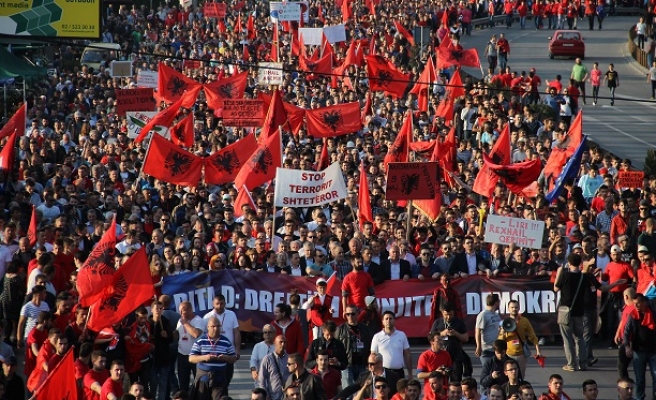 Macedonia's Albanian opposition held a protest Thursday with a participation of 30,000 people calling for an end to the political crisis.

Two parties, Albanian Democratic Union for Integration and Democratic Party of Albanians, announced on Wednesday they will join a boycott of the parliamentary election on June 5 in protest over government control of the media and state bodies, raising doubts about the viability of the poll.

Macedonia has been in turmoil since February last year, when the opposition accused then-Prime Minister Nikola Gruevski and his counter-intelligence chief of wiretapping more than 20,000 people.

The party boycotts came after a month of anti-government protests, dubbed a "Colour Revolution", which have seen demonstrators splatter government buildings and monuments in the capital Skopje with brightly-coloured paint.

Two ethnic Albanian parties have joined the main opposition SDSM party in refusing to take part in the early election, which was called last month as part of an EU-brokered deal to end a political crisis in the Balkan country.

The three parties declined to register candidates before a midnight deadline, meaning the ruling VMRO-DPMNE would be the only major party to stand.

"We are not going to submit lists of MPs," said Bujar Osmani from the Democratic Union for Integration (DUI) ahead of the deadline.

Luan Tresi from the Democratic Party of Albanians (DPA) also confirmed his party's boycott, saying the "minimum conditions for holding credible elections" were not in place.

The DUI and DPA represent Macedonia's ethnic Albanians, around a quarter of the country's two million people, and the DUI is the junior partner in the coalition government.

The crisis in Macedonia erupted last year when the SDSM accused then prime minister Nikola Gruevski of wiretapping some 20,000 people, including politicians and journalists, and said the recordings revealed high-level corruption.

The scandal triggered major protests on both sides, with the government denying the allegations. The EU subsequently stepped in to mediate.

But the crisis intensified last month after a shock decision from President Gjorge Ivanov to pardon to more than 50 public figures involved in the scandal.

This sparked further rallies by both pro and anti-government camps in the deeply divided country.

The "Colour Revolution" continues to draw a few thousand people to Skopje's streets most evenings, with each protest ending in a flurry of paint-hurling.

A special envoy from Germany, Johannes Haindl, was due to arrive in Skopje Thursday to help resolve the situation following discussions between Macedonian parties and Western diplomats.

The EU has also said conditions for free and fair polls have not been met, and warned the breakdown of the EU-brokered deal reached last summer would have "serious consequences" for Macedonia.

Macedonia has been a candidate for EU membership since 2005 but is yet to open accession talks.

It has had close dealings with Brussels over the refugee crisis, closing its borders to thousands trying to reach northern Europe from Greece.