Ministers of Macedonia, Austria, Serbia and Hungary have signed an agreement to tackle the refugee crisis jointly 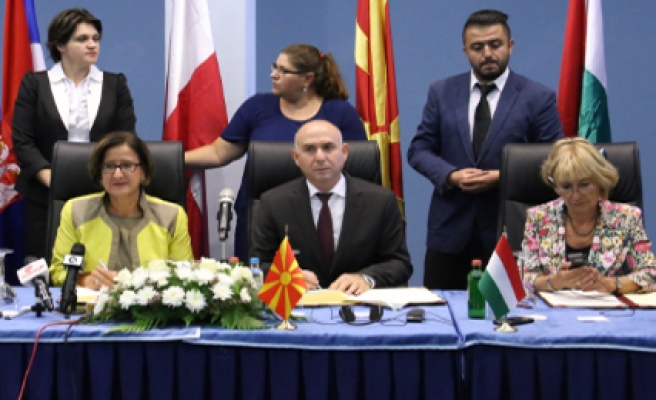 Interior ministers of Macedonia, Austria and Serbia, and the deputy interior minister of Hungary have signed an agreement to jointly tackle the refugee crisis on their borders.

The memorandum of understanding was signed Friday in Macedonia’s Ohrid city.

Austrian Interior Minister Johanna Mikl-Leitner said that a common approach to the refugee crisis could provide a better and a more sustainable solution, because it was an issue all over Europe.

“We are confident that we will provide a better process of collaboration than that was already initially signed between Austria, Serbia, Hungary, and now we will include Macedonia in the fight against the refugee crisis," Mikl-Leitner said.

He called for the need to work as a community to find a common solution to the issue.

Serbian Interior Minister Nebojsa Stefanovic said that one of the key messages of Friday’s meeting was the need to find a complete and comprehensive solution, not a solution that would partially meet one, two or three countries.

"Since the beginning of the year more than 120,000 people have expressed their intention to seek asylum in Serbia. Of course, most of them continue towards western Europe. We need to devise a way for Europe to accept these people, how to find sufficient funds and resources to provide necessary assistance and to ensure their integration.

Deputy State Secretary of the Ministry of Interior of Hungary Kristine Berta said that the parliament of Hungary had proposed to enact comprehensive laws related to refugees.

"The problem with migrants is not a problem for just a few countries, but all over Europe and other countries," Berta said.

Stefanovic also said that Serbia had begun a fight against the smuggling of people and since the beginning of this year, it had arrested over 850 people for such crimes.

In a statement, the ministry said that Austria would consider enabling people to travel in return for money as a human trafficking offense; also enabling people who did not have residence permits to enter the country, even if no money exchange is involved, would be considered a violation of Austria’s foreigners act.

Some Austrians, however, said they planned to bring refugees to Austria from Hungary under an initiative called "Rescue Convoy".

They plan to go Budapest and bring thousands of refugees to the country in their personal vehicles and buses. More than 2,000 people have registered with the "Rescue Convoy" so far.

Hundreds of refugees trying to reach the Austrian border are stranded at a train station in Hungary's Bicske town. They demand permission to travel onwards to Germany, which was being denied to them.