Despite election date being scheduled, Macedonian opposition may boycott it 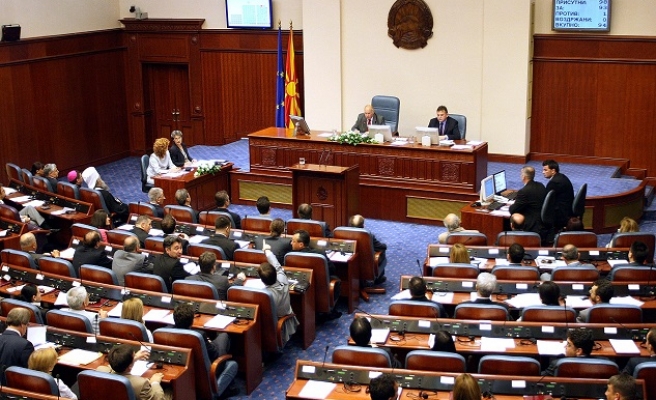 Macedonian lawmakers voted Monday to dissolve parliament next month ahead of an early election in late April, in line with an EU-backed deal to end a political crisis but under threat of a boycott by the main opposition.

The parliament of the Balkan country voted to dissolve itself on February 24, after noting the resignation of Prime Minister Nikola Gruevski, who was required to step down 100 days ahead of a vote in accordance with the deal.

The agreement reached in July last year between the government and the opposition was designed to end months of turmoil in the country of about 2.1 million people.

But the main opposition Social Democratic Union ofMacedonia (SDSM) has since suggested it would boycott a vote on April 24, the date scheduled in the deal, saying that conditions have not been met for fresh polls.

"SDSM and its coalition partners will not take part in the April 24 polls," the party said in a statement released late on Monday.

Earlier, party official Goran Sugareski told parliament that "SDSM is not accepting elections without a free media and a cleaned-up electoral roll."

"SDSM will continue to fight to create fair and democratic conditions for having elections with all the democratic means that we have," Sugareski said before members of the party walked out ahead of the vote.

Parliament also voted in an interim government, led by prime minister Emil Dimitriev from Gruevski's VMRO-DPMNE, whose main task would be to prepare the elections. Out of 123 parliamentary seats, 72 deputies supported the cabinet, which included two SDSM ministers, as previously agreed.

However, the two ministers from the opposition were not in parliament and it was not immediately clear if they would participate in the government.

Dimitriev vowed that "the government will organise fair and democratic elections" and urged the opposition "to be constructive" and participate in the process.

After the country's last elections in 2014, won by Gruevski's VMRO-DPMNE party, the SDSM boycotted parliament saying the polls had been marred by fraud.

Last year the crisis deepened when the SDSM accused Gruevski of wiretapping around 20,000 people, including politicians and journalists, and said the recordings revealed high-level corruption.

The government denied the accusations and in return filed charges against opposition leader Zoran Zaev, accusing him of "spying" and attempts to "destabilise" the country.

Thousands of supporters on both sides took to the streets of Skopje in protest, prompting the European Union to step in and mediate.

Macedonia has been an EU candidate nation since 2005 but has yet to open membership negotiations.

EU Enlargement Commissioner Johannes Hahn, who spent 12 hours in talks with the various parties in Skopje on Friday, said in a statement Monday that he "would have preferred a consensual solution by all parties".

"Now it is critically important that all political and institutional actors in the country do their utmost to ensure fair elections in line with democratic standards," he said.