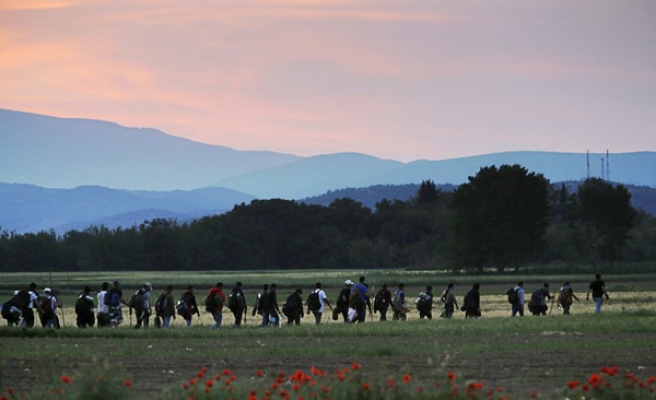 Macedonian President Gjorge Ivanov said in an interview Monday that, when Austria reaches its limit of 37,500 refugee entries this year, the Balkan refugee route will have to close.

He defended his government's border restrictions to refugees seeking to transit from Greece, saying that "in times of crisis, every country must find its own solutions".

German news site Spiegel Online published the interview with Ivanov on a day when hundreds of refugees tried to break through a border fence intoMacedonia from Greece in violent scenes.

Macedonia's and other border closures were sparked by Austria's announcement it would accept no more than 80 asylum claims per day and cap the number of people seeking to cross its territory at 37,500 this year.

Ivanov, asked whether the Balkans route will be closed, said: "When Austria reaches its limit, it will happen."

Asked when that might occur, he replied "perhaps right at this moment".

He added: "We need a political decision now. Soon it will be too late. The Austrian ceiling of 37,000 will be reached."

The Austrian interior ministry in a statement said the number of asylum seekers registered this year was in fact "around 12,000" -- less than a third of the limit set by Vienna.

The number of new arrivals has been rising slowly in recent days, the ministry added, since Austria introduced its limit earlier this month.

President Ivanov meanwhile said that at the moment Macedonian border guards were allowing in Syrians and Iraqis but sending back Afghans.

"Such decisions are made between police authorities along the Balkans route," he said, according to the German-language article. "Whenever a country to the north closes its borders, we follow suit."

"You must understand that the situation changes not just by the day, but by the hour."

Criticising EU inaction, he said: "We can't wait until Brussels makes a decision. We have made our own decisions. In times of crisis, every country must find its own solutions.

"If we had waited for EU guidelines, Macedoniawould have been flooded with refugees."

However, he also warned that criminal networks will help refugees find new ways, via Albania and Bulgaria.

"No-one wants to stay in Greece, Macedonia and Serbia," he said. "The goal of the refugees is Germany. They will find a path there. A dangerous path."