Macedonia's opposition will not recognize the results of Sunday's parliamentary and presidential elections, the leader of the main opposition party said after the vote 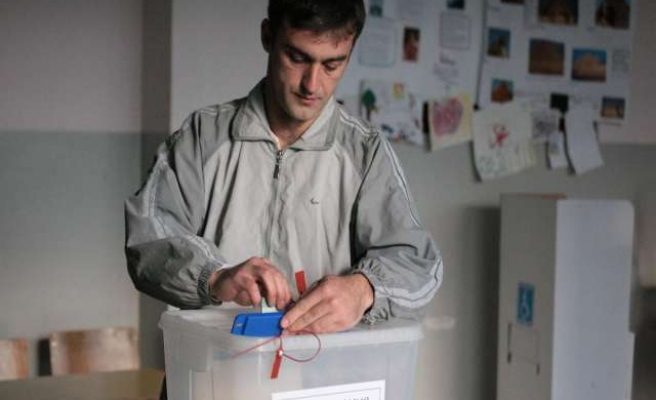 Macedonia's ruling conservative VMRO-DPMNE party claimed a double victory in parliamentary and presidential elections on Sunday, based on its own vote count ahead of an official result.

"I can say that our fatherland is in safe hands. Nikola Gruevski remains prime minister and I can also say...that Gjorge Ivanov remains president," Vlatko Gjorcev, a senior party official, told reporters.

The state electoral commission is still counting the votes, but their early preliminary results show the VMRO-DPMNE in a clear lead in most electoral units. The opposition has said it will not recognise the results and accused Gruevski and his party of "abusing the entire state system", saying there were "threats and blackmails and massive buying of voters".

"A few minutes after the polls closed, I'm here to say that SDSM and our opposition coalition will not recognize the election process, neither the presidential nor the parliamentary," Zoran Zaev, leader of the centre-left SDSM, told reporters.

He accused Prime Minister Nikola Gruevski and his conservative VMRO-DPMNE party of "abusing the entire state system", saying there were "threats and blackmails and massive buying of voters" and demanded a new election.

Gruevski, 43, has ruled the landlocked ex-Yugoslav republic of 2 million people since 2006 in coalition with his ethnic Albanian partners, the DUI party. Surveys and analysts have widely forecast Gruevski and DUI to win a third term.

His party immediately dismissed the allegations as the opposition's attempt to manipulate voters.

"These have been the most peaceful elections so far," said Antonio Milosovski, a senior VMRO-DPMNE official.

Monitors from the Organisation for Security and Cooperation in Europe (OECS) will present their findings on Monday.

Gruevski's VMRO-DPNE could score a double victory as the vote coincided with a presidential runoff in which its candidate, the incumbent Gjorge Ivanov, looked set to beat a Social Democrat rival and win the largely ceremonial post.

Opposition parties have often accused Gruevski of creeping authoritarianism and corruption, while foreign diplomats in Skopje say there are concerns about media freedom and political pressure on journalists.

Gruevski says any complaints of authoritarianism come from opposition parties that lack a concrete political programme to unseat him. He has dismissed as false the corruption charges and has threatened lawsuits against SDSM's Zaev.

It was not immediately clear what concrete steps the opposition would take once the results are officially confirmed. The SDSM said "it was keeping all options open and would decide in the next few days".

Macedonia remains one of Europe's poorest countries with unemployment above 28 percent, but Gruevski's government has achieved solid economic growth, low public debt and a rise in foreign investment, unlike most neighbours in the Balkans.

"It looks like a lost cause for the opposition, Gruevski is too strong," Skopje cab driver Dimitar Janeski said on Sunday.

Diplomats have praised Gruevski for keeping in check tensions between Macedonia's Slav majority and its large ethnic Albanian minority, whose rebellion in 2001 to secure more political rights brought the country to the brink of civil war.

But during his eight years in office, Skopje's bid to join the European Union and NATO has been frozen because of a row with neighbouring EU member Greece over Macedonia's name, which Athens wants changed because it is also the name of a northern Greek province.

Macedonia became a formal candidate for EU membership in 2005 but has made no progress since as Greece has continued to block it. Years of U.N.-mediated talks have yielded no results.

The parliamentary election was called a year ahead of schedule, after the coalition partners failed to agree on a consensus candidate for president.