With an eye to deep rifts exposed after Hungary closed its frontier with Serbia and Croatia, Merkel says blocking the border with Austria to refugees would be reckless 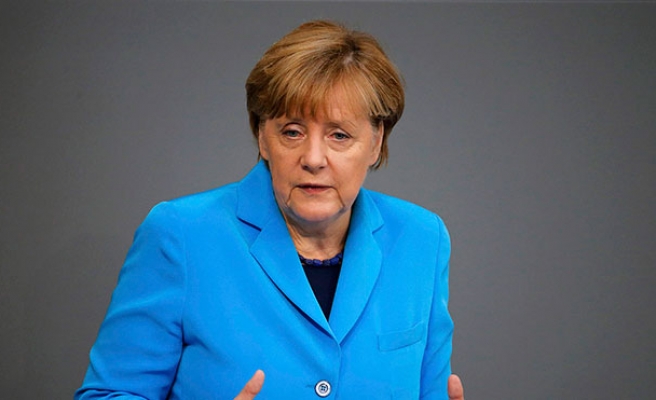 German Chancellor Angela Merkel warned that fighting could break out in the Balkans, along the main route of refugees trying to reach Europe, ifGermany closed its border with Austria, in remarks published Tuesday.

Amid ever-louder calls for Merkel to undertake drastic action to stem the tide of people entering her country, she again rejected the appeals, noting that tensions were already running high between the Western Balkans countries.

With an eye to deep rifts exposed after Hungary closed its frontier with Serbia and Croatia, Merkel said blocking the border with Austria to refugees would be reckless.

"It will lead to a backlash," Merkel was quoted in media reports as saying late Monday in an address to members of her conservative Christian Democratic Union (CDU) in the western city of Darmstadt.

"I do not want military conflicts to become necessary there again," Merkel added, referring to the Balkans.

She said disputes in a region already ravaged by war in the 1990s could quickly escalate, touching off a cycle of violence "no one wants".

Germany has become the main destination for people fleeing war and poverty in the Middle East, Africa and Asia via the Balkans, with up to one million people expected this year.

The EU vowed last month to help set up 100,000 places in reception centres in Greece and along the refugee route through the Balkans as part of a 17-point action plan devised with the countries most affected by the crisis.

But just as Merkel attempts to convince European partners to share out the burden more fairly, she has faced a revolt from within her own conservative alliance against the welcome she has extended to people escaping violence and persecution.

The popular German leader, who marks 10 years in power this month, called crisis talks last weekend to hammer out a unified government stance.

A new round of negotiations is planned on Thursday that will focus on the proposed creation of "transit zones" at the Austrian border with Germany.

The conservatives support the airport-style processing points to allow would-be refugees who do not fulfil asylum criteria to be moved out quickly.

But the Social Democrats, junior partners in the left-right "grand coalition", have rejected them, saying they would create "prison zones" with little practical effect or legal justification.