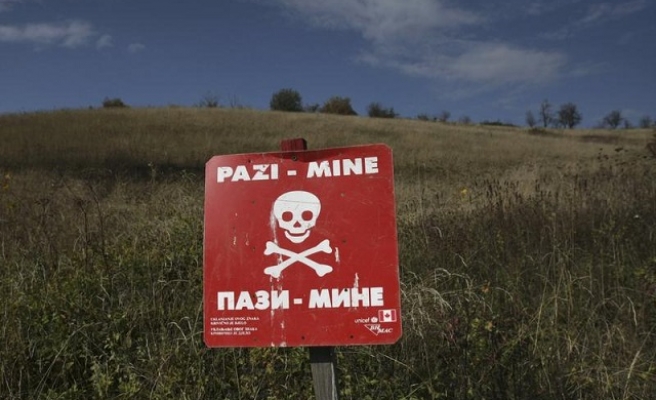 Twenty-two years after the signing of the Dayton Peace Accord which ended the 1992-1995 war in Bosnia, landmines from the fighting are still threatening human life.

Although mine disposal activities started after the armed conflict ended, the risk from unexploded ordinance lingers in many regions.

Over 600 people have been killed and nearly 1,130 injured in 1,754 mine explosions since the end of the conflict.

Damir Vatres lost his hand as a boy in an explosion in the Dobrinja district of the capital Sarajevo.

Vatres found a toy while playing outside his home and put it in his pocket. He tells Anadolu Agency: "Then I went home. After I had eaten a meal, I started to play with the car while sitting at the entrance of the apartment.

“When I pressed on the car a bit hard, it exploded at that moment."

Saying he was drenched in blood, he added: "When I wanted to hold the iron handle in the door to enter the apartment, I realized that my hands were gone in the explosion."

Vatres said families should warn their children, especially in mountainous areas, saying there are still mined areas although a clearance process continues.

While mined land corresponds to only 2.13 percent of the country, 51 mine disposal experts have been killed since 1996.

Muhammed Dulovic, an ordinance removal officer with 11 years’ experience, said he witnessed the deaths of colleagues while clearing mines.

"Sometimes I feel bad because there are still mines all over the country. I'm a little scared too. This is normal," he said.

Slaven Vidovic, a planning expert at the Bosnia-Herzegovina Mine Action Center, said the cleaning process would continue until 2025: "Most of the big cities were cleaned of mines. This struggle is still continuing in small towns and some villages."