Izetbegovic replied the questions about the law of election about nonvoters who are the families and close ones of victims and the upcoming elections in Bosnia-Herzegovina on October 7. 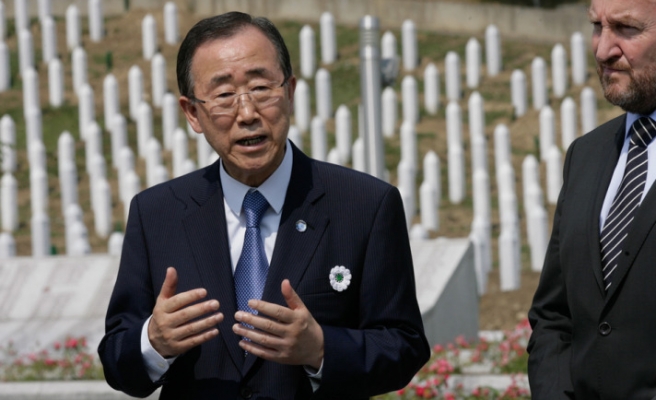 Bakir Izetbegovic replied to questions of AA about him and UN Secretary General Ban Ki-moon's visit to the cemetery in Srebrenica where 8 thousand people were killed in 1995.

Izetbegovic said he told Ban-Ki-Moon that the war in Syria had so many similarities to the war in Bosnia. He said that the war in Syria reminds them the pains of Bosnia and continued, "When we are watching the footage of Syrian war, it feels like we are watching the Bosnia-Herzegovina war. That is why, UN has to take lesson from Srebrenica, victims of Bosnia happen to be the warning for the future issues and warning for Syria." He underlined that they would do anything in order to stop the violence committed by the Syrian regime.

Reminding the Turkish loan of 100 million Euro to the deportees during the rural development and war in Bosnia-Herzegovina, Izetbegovic stressed that he hoped the loan would resolve two big problems in his country which are non-returning Bosnian, Serbian and Croatian immigrants and help improve the agricultural development in the country.

Izetbegovic replied the questions about the law of election about nonvoters who are the families and close ones of victims and the upcoming elections in Bosnia-Herzegovina on October 7.

Izetbegovic clarified, "We are working hard to get rid of candidates who come from the parties denying the massacre.

It's important for us that these parties and their candidates accept the massacre, we do not mind if they are Serbian or Bosnian. We would like to see anyone as a mayor to the people of Srebrenica as long as they do not follow the policy of denying the massacre."