NATO threatened to use lethal force there after an ethnic Serb mob burnt down one post and fired on NATO troops. 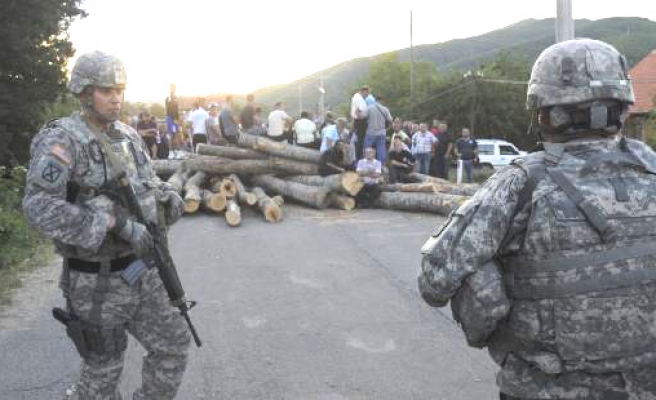 NATO said it had declared two crossings on Kosovo's border with Serbia a restricted military area on Thursday and threatened to use lethal force there after an ethnic Serb mob burnt down one post and fired on NATO troops.

"...both gates are declared military restricted areas and the rules of engagement are very clear," German General Erhard Buehler, NATO commander in Kosovo, told Reuters in an interview.

Violence broke out in Kosovo when Pristina sent special police units on Monday to take control of northern border crossings and enforce a ban on imports from Serbia, retaliating for Serbia's blocking of Kosovo's exports in a row over customs regulations.

The Serbians repulsed the police units, and one Kosovo Albanian policeman died from a bullet wound to the head and another was wounded by a grenade.

On Wednesday Serbs attacked the Jarinje border post, throwing firebombs and firing at members of NATO's peacekeeping force and at a NATO helicopter. No injuries were reported.

On Thursday U.S. troops were manning the post, checking cars for weapons.

"The soldiers can employ lethal force, they can employ their weapons to defend themselves, to defend all the people, to defend the property, the military restricted area," said Buehler, interviewed on a bridge separating the Serb and Albanian sides of Mitrovica, surrounded by troops in combat gear.

Earlier, Serbian police and NATO troops reinforced checkpoints on both sides of the Kosovo border to prevent further ethnic violence.

Kosovo declared independence in 2008 -- a move not recognised by Serbia -- and the 60,000 Serbs living in northern Kosovo near the border still consider Belgrade their capital. A further 40,000 Serbs live in other enclaves.

The Kosovo police retreated after Monday's attack but Kosovo Prime Minister Hashim Thaci said on Thursday he would send them back to all border crossings. The U.S. and the European Union criticized Thaci for acting without consulting them.

"Yesterday we had a demonstration at the gate and all of a sudden 50 guys with militia type uniforms, masked, armed with explosives, with hand grenades, with RPGs (rocket-propelled grenade), anti-tank grenades showed up with explosives and they attacked the gate," Buehler said.