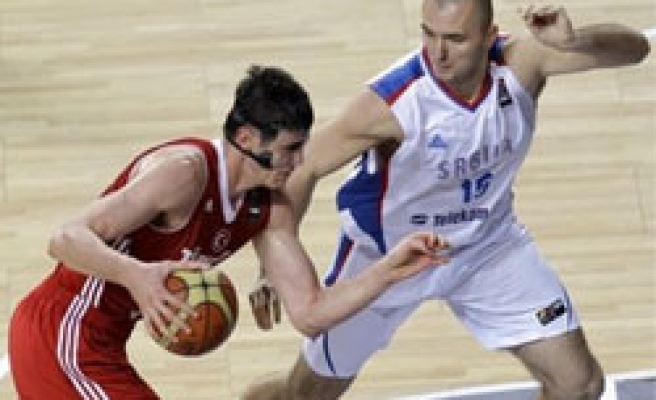 The clashes began after Turkey beat Serbia 83-82 in a World Basketball Championship match on Saturday night.

"KFOR will not tolerate any violence in Kosovo and I ask the population in Kosovo to help that the troublemakers can be arrested."

Hundreds of people from the ethnic Albanian-dominated southern part of Mitrovica gathered to celebrate Turkey's victory on the Ibar river.

Serbs from the north and Albanians from the south started pelting each other with stones, prompting Kosovo police and European Union security forces to close the bridge and separate the two groups. Police dispersed the crowds with tear gas.

Turks and most Albanians share the Islam religion. Kosovo is home to a sizable Turkish minority and Turkey is a strong supporter of Kosovo's independence.

A spokesman for NATO in Kosovo said two NATO soldiers were slightly wounded in the clashes, but did not provide details.

Early on Sunday, a French police officer serving with the European Union police and justice mission (EULEX) in Kosovo was shot in the leg. Karin Limdal, an EU spokeswoman, said the officer was not seriously wounded, adding: "We don't know where the bullet came from or the circumstances."

Serbia lost control over Kosovo in 1999 after NATO bombed Serbia to halt its ethnic killings on independence-seeking Albanians.

Kosovo declared independence from Serbia in 2008.